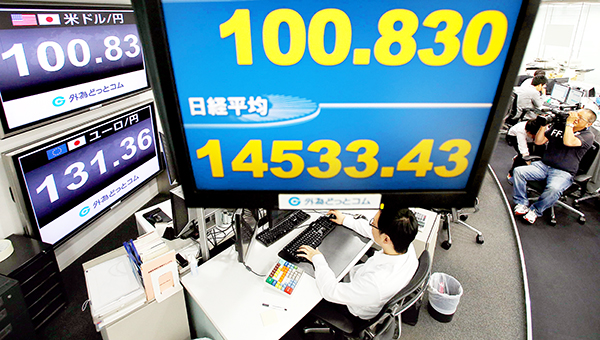 An employee of a foreign exchange trading company works near monitors displaying the Japanese yen’s exchange rate against the U.S. dollar and the euro as well as the Nikkei share average in Tokyo. [REUTERS/NEWS1]

Being a currency isn’t always easy. Sometimes they’re asked to be weak. Weak can be good. But not too weak. That can be unneighborly, or cause inflation - and if a currency weakens too fast, that might be a crisis. What’s a currency to do?

I spent a large part of my professional life trying to forecast currency movements. I used to joke that while I knew more than most people, that wasn’t saying much. Asked about the euro’s prospects, I’d say it will go up and down. But some habits are hard to break. I still guess where the euro is when I get out of bed each morning, and if I’m much off I want to know what happened. The euro-dollar exchange rate is probably the most traded number in the world, and it takes a lot to move it very far.

The best you can do is base your guesses on the wider financial context. This doesn’t just go for the euro. What are the circumstances that might make a weaker currency good for Japan but not for Argentina or Indonesia? It’s a question of financial conditions more broadly: some weighted combination of economic activity, interest rates, stock-market performance and exchange rate.

For instance, if the country needs a macroeconomic stimulus, a depreciation can help. Likewise if the economy is suffering from a lack of competitiveness in world markets. (Under those conditions, you’d expect a depreciation to boost stock markets: Investors will bet that export growth has moved on to a higher track.)

But if domestic and foreign demand is already adequate, stimulus is inappropriate and a currency decline is likely to cause inflation through higher import prices.

What to make of events so far in 2014? I suspect Japan Inc. has a bit of a problem. In my view, the yen’s decline from its peaks in late 2012 was among the more predictable developments of recent years - and I say that with all due modesty about my own (or anybody else’s) ability to make currency forecasts. What made it predictable? An unusual combination of factors coming into alignment.

Japan’s policy makers were determined both to stimulate the economy and to correct a widely recognized overvaluation of the currency. Crucially, most other governments agreed that this was desirable. This is no longer the case. Many countries, and Japan’s advanced-economy competitors especially, are still facing a bigger risk of deflation than of inflation. Their governments don’t wish to see their exporters’ competitiveness erode any further. When the yen was plainly, indeed ridiculously, overvalued, renewed Japanese competitiveness was tolerable. Things have changed.

The thinking of China’s government needs to be weighed as well. Until recently, China has let the renminbi appreciate even as the economy slowed. There’s a limit to this forbearance. Sure, if the yen weakened further as Japanese domestic demand expanded, there’d be something in it for China and other exporters. But if it merely results in Japan increasing its share of global exports while allowing its authorities to tighten fiscal policy through a consumption tax, the deal isn’t so favorable. I don’t think too many people in Beijing - or, for that matter, in Washington, Brussels or Frankfurt - would be pleased with that.

As for the emerging-market currencies, don’t expect them to move in lock-step. The watchword is diversity. Some will benefit from currency declines, some won’t, and others won’t see their currencies depreciate in the first place. Currencies will go up and down. In a world of floating exchange rates, they’re supposed to.