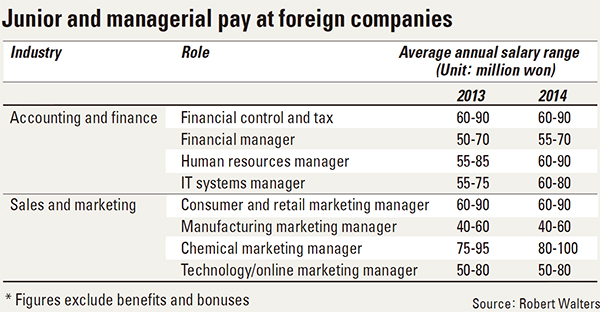 The year 2014 is shaping up to be very good for mid-level employees in Korea looking to make the leap to foreign companies, thanks to high demand for global-minded junior- and mid-level employees. In fact, those workers who make the change could see an average salary bump of around 10 percent.

The report said that, while there is a continued abundance of skilled, senior-level employees, their outmoded tendencies have become a major issue for foreign firms, spurring an interest in younger employees with career potential.

The headhunting company predicted that this trend would last all year and beyond as many companies look to restructure their work forces and strengthen their organizations with fresh-minded, young talent.

The survey looked at Robert Walters’ clients in Korea and the individual job candidates it helped find new positions. The international headhunting company, which runs 53 offices worldwide, did not disclose the number of their corporate clients or job candidates.

The report indicated that this is a good year for young and mid-level workers, especially those in their 30s with between five and seven years’ experience. Such workers could expect to find positions with annual salaries from 40 million won to 90 million won ($37,282 to $83,885).

While there is also some demand for entry-level workers at foreign companies, mid-level employees are receiving more attention than ever from international recruiters nowadays due to their foundation of business skills already in place.

“The education system is not producing the global skills that international companies, as well as increasing numbers of Korean companies, require,” said David Swan, managing director at Robert Walters Korea.

But when it comes to the biggest issue that matters to recruiters in making their final decisions, Swan said it comes down to personality.

“Those technical skills are mostly well-taught in the educational system, but what is often lacking is the ‘soft skills’ in business relations: the ability to present business material, to express opinions when engaging into a constructive debate and to understand different cultural nuances. These are becoming increasingly important,” he said.

With the increase in interest in mid-level employees, salaries are also rising, sometimes by as much as 20 percent, based on last year’s data. Workers who showed average performances at their previous workplaces typically received salaries 10 percent higher at their new companies, while high-performing employees saw their salaries go up by as much as 20 percent. According to the survey, the employees who stayed at their jobs typically received raises of only about 3 percent to 4 percent.

Despite a lack of recruiting by large foreign corporations in 2013, Robert Walters Korea reported that small and midsized foreign tech and manufacturing companies that had newly entered the Korean market were major job creators.

By sector, the IT industry, including mobile app and game developers, as well as more traditional industries like shipbuilding and chemicals, showed the largest expansion in last year’s foreign recruitment market. Headhunters predicted that such a trend will continue this year, especially for software services companies involving both for technical skills in Big Data, cloud computing and cybersecurity, as well as business development skills for those who can work with Korean conglomerates.

The industrial sector largely increased job openings last year in sales and marketing, and the trend will continue this year because foreign companies that supply parts to Korean manufacturing companies are expected to further expand their business in Korea.

Finance, accounting and other financial services are forecast to stay sluggish this year in terms of job postings. The headhunter reported that those sectors will mostly see new positions for restructuring companies looking to improve employee quality. Those new employees received salary increases of up to 15 percent.

The headhunter also mentioned that this year’s job market will be helped by Korean conglomerates’ foreign expansion plans, because those companies prefer to recruit young, managerial-level employees who can work at overseas branches directing local workers.