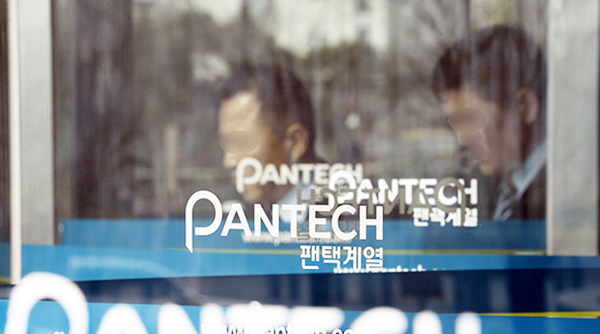 Pantech’s logo is shown on the entrance to the smartphone maker’s headquarters in Sangam-dong, northwestern Seoul, yesterday. [NEWS1]

Pantech, the country’s No. 3 mobile phone manufacturer, is once again at a crossroads after submitting an official debt workout document to creditors including Korea Development Bank and Woori Bank.

“We decided to apply for a workout to set a mid- and long-term survival plan and innovatively improve our financial soundness,” said a Pantech official.

It is the second time that the handset maker, founded in 1991, has applied for a debt workout program. It was released from its first in December 2011.

For five years from April 2007, Pantech was under a debt workout plan, but it was released after posting a surplus for 20 consecutive quarters.

One of the factors that allowed Pantech to stand on its own again by improving its financial sheet was the release of its Vega smartphone in 2011.

This time, however, industry insiders are more skeptical about Pantech’s survival prospects, especially at a time of intense competition in the smartphone industry. 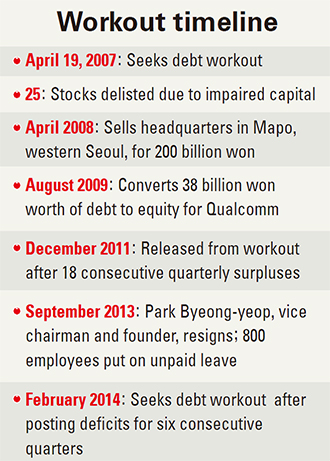 Throughout 2013, the company worked to raise capital, generating only $23 million from Qualcomm and 53 billion won from Samsung Electronics, which bought stakes in the company. Making matters worse, founder Park Byeong-yeop resigned in September under pressure over the company’s worsening performance.

Industry sources say the ideal scenario for Pantech would be to be bought or receive capitalization by a foreign company after stabilizing its financial sheet.

Sources note that there has been interest from China and the Middle East in acquiring Pantech.

“In terms of technology, [Pantech] is able to compete with other global smartphone manufacturers,” said Lee Seung-hyuk, a researcher at Korea Investment and Securities. “But it should be able to receive investments from domestic and global investors in order to avoid being left out of the brand competition in the market.”

Some say, however, that the outlook isn’t rosy for Pantech.

An industry analyst noted that “unlike two to three years ago, today, Chinese manufacturers’ technological capabilities have improved and there would no longer be many investors eyeing Pantech.”

As of now, it is also unclear whether Pantech will receive funding from its creditors.

“Pantech has been posting losses and it won’t be hard at this state for financial institutions to inject funds,” said a creditor source.

“In the fourth quarter of last year, we narrowed the loss gap [from the previous quarter],” said an official from Pantech. “And in January, we posted a surplus. We could create new opportunities through the debt workout.”