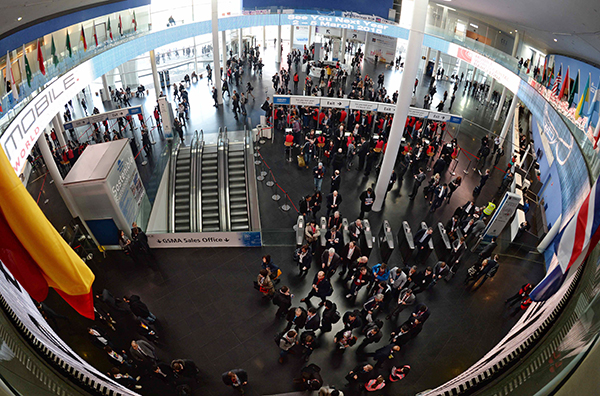 The entrance of the Fira Gran Via, an exhibition and conference hall in Barcelona, Spain, is crowded with visitors hoping to get a glance at the latest mobile technology available at the Mobile World Congress on Tuesday. The global event ends today. [NEWSIS]

BARCELONA, Spain - Samsung Electronics earned some attention at the Mobile World Congress, thanks to several new smart devices, including the Galaxy S5.

But the Korean companies that gained the most from the leading European tech fair were the nation’s three mobile operators, boosting confidence that they can also be first movers in the global telecommunications industry.

The two companies also received awards for outstanding overall mobile technology - said to be the most prestigious awards in the mobile operations industry - as chosen by a panel of 16 chief technology officers from 16 mobile operators.

The companies said their awards recognize the overall level of Korea’s mobile technologies. Indeed, Korean companies showcased other world-class technologies during the Mobile World Congress. SKT demonstrated - for the first time in the world - an LTE-A technology that combines three frequency bands, enhancing LTE-A speeds up to 450 megabits per second. 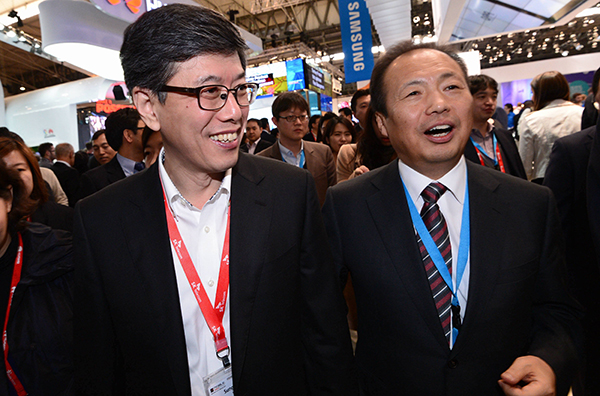 That makes the service up to six times faster than standard LTE services, good enough to download a 800-megabyte movie in 15 seconds. The process to standardize three-band LTE-A technology is underway around the world, and industry watchers say Korea is in a good position to lead.

“The number of people at MWC that are visiting the booths set up by Korean mobile operators has risen significantly over recent years,” said Yoon Yong-cheol, a public relations official for SKT. “Korea is being recognized as a benchmark in the mobile sector for global telecommunication services.”

The companies also suggested a blueprint for the future of mobile, such as SK Telecom’s “Context Platform.” The Context Platform helps devices get a sense of a user’s situation through components embedded on a mobile device, like the camera, GPS or Wi-Fi.

The company said that the Context Platform will lead to the development of a customized individual service.

LG U+, Korea’s third-largest mobile carrier, showcased LG Board, an intelligent mirror display equipped with telecommunication services. When a person approaches it, the mirror turns into a digital display with which people can make video calls or exchange information.