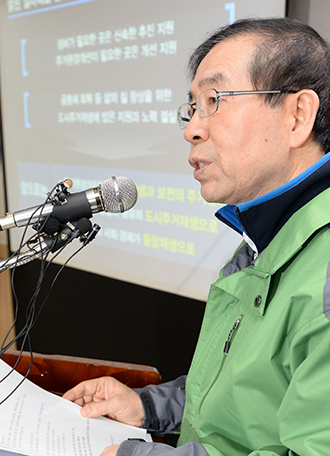 At a special briefing at City Hall, the mayor said he will discard the city redevelopment program officially known as the New Town project, which was pursued by former Mayors Lee Myung-bak and Oh Se-hoon. Instead, Park said he will initiate his own plan to support underdeveloped regions in Seoul.

Park added that his city restoration project will be jointly led by the government and the private sector, with a total of 1 trillion won ($938 million) invested over the next four years.

Rather than demolishing underdeveloped areas, the city government will preserve those neighborhoods while remodeling aging houses and infrastructure, he said during the briefing.

For instance, the government will provide subsidies to citizens for home maintenance. And in some instances, in more populated areas, the walls around residents’ houses will be torn down to make way for more parking. In addition, better streets will be created, new parks will be built and more CCTV cameras will be installed.

All procedures for the redevelopment plans will be fully discussed with local residents, the mayor added.

Unlike the New Town project, which was funded by the private sector, infrastructure costs under the new program will be paid in full by the city government, the mayor said.

Park noted that he will launch headquarters for the city restoration project that will function similar to the Boston Redevelopment Authority or the Boston Housing Authority, the U.S. city’s housing and development agencies.

“Our vision is to boost the branding of local regions by refurbishing old, underprivileged areas and restoring its original identity of each district, in order to realize social integrity,” the mayor said.

However, in order for the mayor’s plan to be implemented and take effect, it would mean he would have to be re-elected in the upcoming general elections on June 4.

The New Town project was started in 2002 by former Seoul Mayor Lee Myung-bak, who later went on to become Korea’s president. Although the project appeared to be similar in its basic concept with other city redevelopment projects - demolishing dilapidated residential areas while building new apartment complexes - it was different in one crucial way: the project also oversaw the construction of new infrastructure, including roads and other facilities.

At the time, Lee designated 34 areas as regions to be redeveloped, including Eunpyeong District in northwestern Seoul and Wangsimni in northeastern Seoul. The property market in Korea back then was booming, and housing prices in those 34 regions jumped on multiple occasions.

In 2006, newly elected Mayor Oh Se-hoon took over the project, announcing similar programs for rural areas. The initiative also became popular in other cities, and many local government offices around the country referred to their rural neighborhoods as New Town regions.

However, the ambitious project fell on its face in 2008 in the aftermath of the U.S. subprime mortgage crisis. Housing prices in New Town areas plummeted as a result, falling again in 2011 following turmoil in the euro zone. In November 2011, shortly after Park was elected, he terminated the project.