Korean art? Museum had it all along

Korean art? Museum had it all along 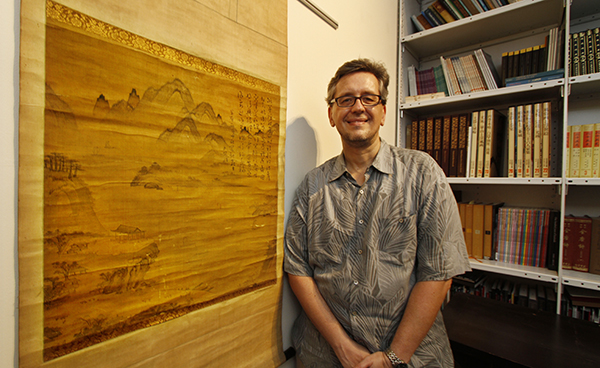 Shawn Eichmann, curator of Asian art for the Honolulu Museum of Art, poses next to a 16th-century Korean painting in Honolulu. The museum discovered two paintings from late 16th-century Korea in its collection. [AP/NEWSIS]

HONOLULU - The Honolulu Museum of Art has discovered two paintings from late 16th-century Korea in its collection, including one that has been called an “earth-shattering” find.

“This is like discovering a lost Vermeer,” said Shawn Eichman, the curator of Asian art at the museum, referring to the Dutch master, the Honolulu Star-Advertiser reported.

The paintings are from the estate of Richard Lane, an art collector and dealer. Lane, who lived in Japan for about 50 years, helped catalog the museum’s James Michener collection of Japanese prints. He left his personal library to the museum when he died in 2002.

When museum officials went to Japan to claim the materials, they came across his separate personal collection. It contained some 20,000 items, including more than 3,000 paintings, books made from woodblocks and other artifacts. The museum acquired the entire collection for about $26,000 in 2003, but without a catalog, it was unclear what it contained.

Asian art experts have been studying the pieces over the past decade.

Korean paintings from the late 16th century are difficult to identify in part because so few survived Japanese invasions, which started in 1592 and lasted until 1596.

In January, a group of Korean experts - including the world’s leading expert on Korean art, Chung Woo-Thak, from Dongguk University - came to Hawaii after initially studying some photographs the museum had sent. One of the last paintings they looked at depicted scholars meeting in a small pavilion, boats on a calm lake and rocky, pillar-like mountains. A calligraphy inscription dated the work to 1586. The painting immediately piqued their interest.

The painting is important because it is dated just a few years before the Japanese invasions and because it depicts a meeting of scholars, a particular genre of painting, Eichman said. The inscription was by a famous Korean poet, who is believed to be one of the participants in the meeting.

The other painting was put on display at the museum about three weeks ago.

It depicts the Chinese philosopher and cosmologist Zhou Dunyi, a standard subject of the day, in contemplation beside a small pool with lily pads. It’s not as badly deteriorated as the painting of the scholars and was deemed suitable for exhibition.

Museum officials expect to receive grant money to send the painting of the scholars to South Korea for conservation. Eichman expects it will have a grand unveiling there before it is returned to Hawaii.