2 Incheon walks to take you back in time

2 Incheon walks to take you back in time 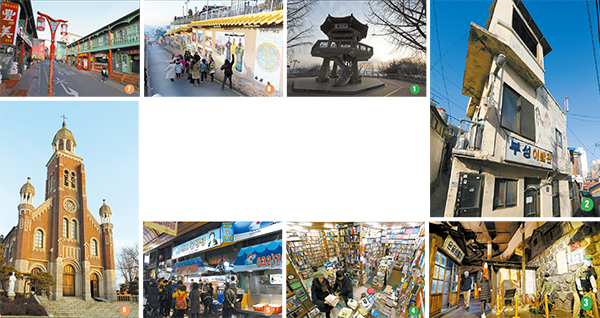 1. Wolmi Island and Incheon Port can been seen from the pavilion at Jayu Park. 2. Buseong Barber Shop. 3. The museum at Mount Sudoguk recreates the house from the old slum town of Songhyeon-dong. 4. Abel Bookstore on the old bookstore street. 5. Chicken gangjeong is a popular snack at Sinpo Market. 6. Dapdong Cathedral is one of the few old buildings to survived the Battle of Incheon from the 1950-1953 Korean War. 7. Incheon’s Chinatown. 8. The mural street in Chinatown. [JoongAng Ilbo]

In the late Joseon Dynasty (1392-1910), Japan and Western countries forced the weak Joseon to open Jemulpo Port, as Incheon was then called, forcing the country to give up concessions and allow trade.

At the same time, however, we cannot deny that the opening of Jemulpo provided entry to many advanced goods and ideas.

If you want to learn about Incheon and its history, there is a walking route so you can do just that. The Incheon Dulle-gil, or circular trail, consists of 14 routes that stretch for a total of 120 kilometers, or about 75 miles, with the longest one being 12.7 kilometers. Most of the routes are flat and are not hard to walk.

Since 2011, Incheon city government and private investors have been putting together the trail network as part of a project to preserve the environment. The first nine courses opened in December that year, and five more opened in July last year.

Route No. 11, Yeontan-gil - the transformation of a slum

On Jan. 23, the JoongAng Ilbo walked Incheon dulle-gil No. 11 with 57-year-old tour guide Kim Jong-woon. The journey began at exit No. 1 of Dowon Station on Incheon subway line No. 1.

Dowon Station was once a major transportation hub, and Incheon was the first city in Korea to get a train station. A 33-kilometer railroad connecting Incheon and Noryangjin Station in Seoul opened in 1899, and its ground-breaking ceremony was held at Dowon Station.

Before the railroad was built, it took 12 hours to get from Incheon to Seoul, but the train reduced that to just an hour and a half.

Some scholars say the railroad even pushed Korean toward living with a fixed time schedule, because suddenly people needed to keep track of time in order to catch the train.

After walking down the road, we came to a hill named Soeppul, literally “bull’s horn.” Soeppul (pronounced “sway-pool”) is the old name for Sungui-dong in Nam District, where the Woogakro Culture Village now exists. The area was once slated to be redeveloped into a large apartment complex, but the plan was halted, and some old residents who didn’t leave the area and some artists from other regions developed the area into an art village by painting walls and running creative workshops.

People started living in the hillside area after Jemulpo Port was opened to Western countries in 1884, when they were removed from their old neighborhood to make room for foreign settlements. Refugees settled there after the 1950-1953 Korean War, and in the 1970s it was full of people living through difficult times.

Many old people we met walking on the trail recalled memories of growing up there, because they now take photos of the strange landscape and alleys.

After passing some alleys, the sound of people chatting loudly was heard. An elderly man stepped out of the 50-year-old Buseong Barber Shop with a big smile, apparently quite happy with his new hairdo.

The tour took us to a church on the top the hill next. There we came across Yeonghwa Elementary School and Changyeong Elementary School, which are both more than 100 years old. The alleys around the schools were once famous for their used bookstores. There were more than 50 bookstores in the 1970s, but only five are left now. Many people used to come here in the 1970s from as far as Seoul to buy old and rare books, but these days most of their customers are tourists.

A woman in her 30s suddenly gave an exclamation of a joy. She thought she had found a first edition of a book written by her favorite author.

The trail then leads people to Mount Sudoguk in Songhyeon-dong. Its previous name was Mount Songnim, but the name was changed when a waterworks office (or “sudoguk” in Korean) for the region was built on the top of the mountain in 1909.

Incheon’s city government says there are about 3,000 households in the area, but local residents estimate that there were actually closer to 30,000. “My friend who lived here when he was young said almost every resident here remodeled their house to create more rooms to rent out,” said Kim, our tour guide.

After walking downhill for about 10 minutes, we came to Dongincheon Station, the final destination of route No. 11.

There are many colorful buildings in Woogakro Culture Village in Incheon. Local residents and artists opened art workshops and painted the walls to improve the condition of the old neighborhood.[JoongAng Ilbo]

Seongchangpo, or Seongchang Port, is the old name for Incheon Port. “The area around the port was a central place for 100 years for traders, after Jemulpo Port was opened to the West,” our tour guide said. “But it was rapidly left behind after the city government and other government offices moved to Nam District in the 1980s.”

After passing Jungang Market next to Dongincheon Station, we came to the streets that were once home to many foreign consulates. Most of those buildings were destroyed during the 1950-53 Korean War, though, and the only major building that survived was Dapdong Cathedral. “General MacArthur ordered not to bomb the church when he operated the Operation Chromite,” Kim said, referring to the Battle of Incheon in September 1950.

The population of Incheon was only 3,000 before Jemulpo Port was opened to the West, but it increased to 40,000 by the 1930s and is today 2.8 million. Kim said only 10 percent or 20 percent of the current population consider Incheon to be their home town. The population mostly consists of job seekers from Jeolla and Chungcheong, along with a few people from Hwanghae Province in North Korea.

From the top of the park, you can see Incheon Port and Incheon Bridge, with Wolmi Island dimly visible in the distance.

Chinatown was the next stop. It was once the settlement where people from Qing Dynasty China lived and traded. The area is full of Chinese restaurants and stores painted in fancy gold and red.

Right next to Chinatown is the old Japanese settlement. Many old buildings, once banks and homes, are still there but have now turned into museums.

All too quickly, our journey back in time is over. To return to Seoul, we take the train, much as people would have done 100 years ago.