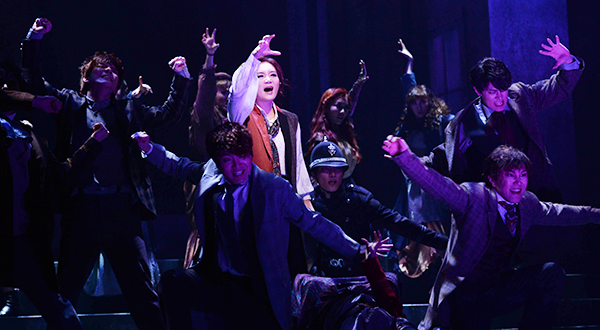 A scene from “Sherlock Holmes: The Bloody Game,” on Thursday at the BBC Art Hall in Sinsa-dong, southern Seoul. [NEWSIS]

Arthur Conan Doyle’s iconic Sherlock Holmes has been reinterpreted endlessly over the years, in movies, TV, radio, comic books, video games and more. He’s even been written for the stage many times. But as a musical?

Actually, Holmes was made into at least two musicals over the years, but they were not so well received.

In musical-mad Korea, however, an original musical, “Sherlock Holmes: Secret of the Anderson Family” was one of the biggest hits of 2011.

Created by director Noh Woo-sung, with help on the melodies by Choi Jong-yoon, Korea’s version of Holmes piled up the awards, including top prize for best musical at the 2011 Korean Musical Awards.

Now, Holmes is back, in a second musical adventure created by Noh. The new story, titled “Sherlock Holmes: The Bloody Game,” takes place three years after the first story. It began its run on Saturday at the BBC Art Hall in Sinsa-dong, southern Seoul.

Because movie sequels and later seasons of television dramas can often disappoint audiences, Noh says he worked hard getting the balance of new and familiar right.

“I bravely tried to create a musical series in Korea,” said Noh. “But honestly, producing the second ‘season’ of the musical has been quite burdensome. I really wanted to make the second season better than the first, but I realized that I had to let go of that obsession. I think I managed well by constantly focusing on the two words ‘same’ and ‘different.’?”

Noh said he wanted to bring back the elements that were highly praised by audiences because he believes it’s the “virtue of doing a musical series.” However, he wanted to make the story completely different because “each work has to have its own vitality.”

Noh started off making his sequel a slightly different genre. While the first was a “whodunnit,” he tried to make the second more of a straightforward thriller.

“The attractive characteristics of the main characters, Sherlock Holmes and Jane Watson, continue to exist in the second season, however, we’ve changed the music style, the staging and everything else to create something completely different. It will not be the ‘same old sequel.’?”

The same two actors who played Holmes the first time around, Song Yong-jin and Kim Do-hyun, are back again as the eccentric detective.

“I would bet my 15-year acting career that this will be the best musical this year,” said Song during a press conference on Thursday at the BBC Art Hall. “When I first heard about this musical series, I was skeptical that it would be successful. But I am so glad that I am here to perform the second season now.”

Song said that the audiences will be able to see how “Sherlock Holmes evolves from the first musical to the second.”

“In the second season, audiences can witness Sherlock Holmes’s life bottoming out,” said Song. “I am already curious how he’ll evolve in the third season.”

Kim, who alternates the lead role with Song, said that, “Sherlock Holmes is the same character in the first and the second musicals, but he is a different person. Everything about him has changed.”

Actor Yoon Hyeong-ryeol, who has been busy playing the role of the Hunchback in the musical of “The Hunchback of Notre Dame,” plays Clive in the Holmes sequel, a man described as “the best detective in Birmingham.” Actress Lee Young-mi plays Jane Watson, while a mysterious man named Edgar, who appears whenever a crime occurs, is played by actor Lee Ju-gwang.

Song says it’s not just the title that’s a “bloody game.” He said the actors and actress in the musical are so outstanding, the rehearsals have been like a “bloody game.”

“We were so impressed by the charms and talents in each other that we had to try harder to stand out,” said Song. “So it’s been like a ‘bloody game.’?”

The musical will run until March 30. The performances start at 8 p.m. on weekdays, at 3 and 7 pm. on Saturdays and at 2 and 6 p.m. on Sundays and public holidays.