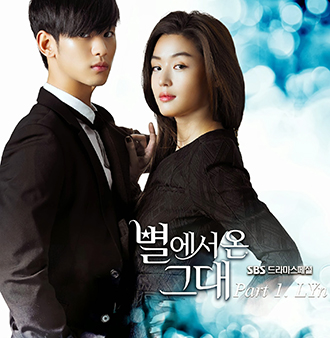 SBS’s hit series “My Love From the Star”

Although SBS’s hit series “My Love From the Star” ended last week, its soundtrack continues to do well on online music charts around the Asia Pacific.

The first single from the drama, “My Destiny,” sung by Lyn, has topped the iTunes and other online singles charts in Hong Kong and Taiwan, and had done well in Indonesia, Malaysia, Singapore and Thailand.

“We appreciate the support of both domestic and international fans,” said an official from Lyn’s agency, Music & New, over the weekend.

The success of the song grabbed the local media’s attention because it is unusual for a song from a soundtrack to do well outside of Korea, especially one not sung by a K-pop idol band.

“My Destiny” was also a big hit in Korea, with its December release topping all the major online music charts.

In addition to the Lyn song, several other singles from the “My Love From the Star” soundtrack are also doing well on charts around Asia. On the MOOV chart, one of the largest online music outlets in Hong Kong, four songs from the soundtrack are sitting in the top five of the daily singles chart, led by Kim Soo-hyun’s song “In Front of Your House.”

The ever-increasing popularity for the show has Kim’s popularity growing in China, too. Kim now has 4.6 million followers on his Weibo page, the Chinese microblogging site that is like Twitter, and this week he will fly to Nanjing, China, to appear in a local entertainment show.