Big Data in the driver’s seat

Big Data in the driver’s seat 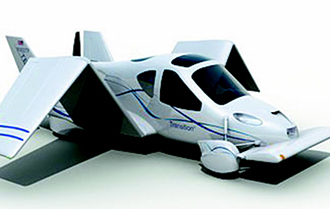 A prototype of flying car provided by Terrafugia Inc. Though it still seems a distant prospect, new vehicle technology is rapidly taking hold.

The development of the Interstate Highway System in the 1950s made the car the preferred individual mode of ground transportation. This upended residential patterns, creating suburbs and exurbs, and relegated rail to the background.

Sixty years later, however, America has changed. City centers have been revitalized and are once again desirable residential areas. Traffic congestion and pollution are recognized as significant problems, as is the inability to evacuate cities in an emergency. Car-sharing and bike-sharing are on the rise. And technology is in the early stages of reinventing roads in ways that can save lives, cut costs, raise revenue, reduce congestion and build businesses that create jobs of the future. The oldest of infrastructure - the Romans built roads - will soon begin to offer a very different experience.

Flying cars (the Massachusetts start-up Terrafugia is working on it) still seem a distant prospect, but new vehicle technology is rapidly taking hold. Google is testing driverless cars on select roads in California. BMW and Audi showcased their latest autonomous electric vehicle models at the January Consumer Electronics Show in Las Vegas. Mercedes-Benz’s self-driving S-class sedan began to be tested on German city streets in September, thanks to a more hospitable European regulatory environment, which already allows automated steering up to certain speeds, as long as drivers can override it. A Department of Transportation project with major U.S. auto manufacturers is testing use of vehicle-to-vehicle communication systems to improve safety in a fleet of 150 cars that can, for example, keep you in your lane.

Vehicles are beginning to dynamically interact with roads and each other. An estimated 900,000 front-to-rear vehicle crashes per year in the United States cause injuries and deaths and cost about $2 billion, according to the National Highway Traffic Safety Administration. Equipping cars, trucks and buses with sensors and network connections can ensure that vehicles avoid danger, saving lives and money.

Technology is also changing where and when we drive. To bypass traffic congestion, motorists in Minneapolis-St. Paul are willing to pay the hourly equivalent of $60 to $120 for use of a High Occupancy Toll lane, which is charged to an electronic pass. The system dynamically changes pricing, depending on time of day and use. It resembles an auction for the use of road space, brought to you by Big Data. You can join similar auctions for road segments in Seattle, Miami, Houston and Los Angeles - saving time and increasing productivity.

If getting there fast is worth a big premium to you, what are you willing to pay to find the one available parking space within a block of your destination? New companies such as Streetline, ParkMe, Park Assist, ParkingCarma and Parking Panda offer apps enabling you to pay for municipal on-street parking or private off-street parking while sensors direct you to spots via your smartphone. In San Francisco, SFPark tracks open parking spots and sets prices based on demand and availability. Soon these services will communicate directly with your car.

The trend is clear. The Information Superhighway will run the highways and the vehicles on them. We can no longer say, paraphrasing Gertrude Stein, that “a road is a road is a road.” The same stretch of fixed, inert roadway can now interact with vehicles and surroundings (e.g., digital billboards) to produce different outcomes at different times, aided by sensors. Weather sensors from Vaisala OYJ can be built into the roadbed. Sensys Traffic AB’s traffic monitors go under roads or bridges. Above-ground sensors from Econolite Control Products integrate cameras and processors. The GPS systems in today’s vehicles use only a fraction of their information capacity.

The big question is whether technology will be the way to address transportation and infrastructure problems? There is much evidence that crumbling roads and bridges have brought the U.S. to the brink of crisis. America has declined in world rankings of infrastructure and transportation, and is now 15th on World Economic Forum indices. Technological innovation is an American strength in international comparisons, but U.S. scores are lower for technology deployment. We’re still not using enough of what we invent. But if technology innovations can excite the public imagination, perhaps political will could be aroused, too.

Moving people and goods won’t happen without moving information. Yet companies in those about-to-be interdependent industries rarely communicate. America needs a cross-sector, cross-industry discussion involving entrepreneurs, large manufacturers and visionary public leaders to identify priorities and advocate for change. Although I’m reluctant to call for another commission that goes nowhere, at least the members could let their cars do the driving and find parking.