Domestic auto sales on the rise

Domestic auto sales on the rise 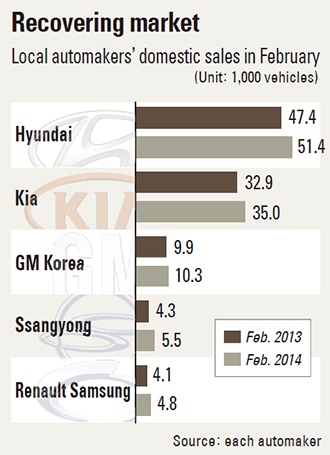 Korean automakers saw their February domestic sales increase compared to a year ago, which signaled that the auto market is slowly recovering.

According to sales data from five automakers (Hyundai, Kia, GM Korea, Ssangyong and Renault Samsung), their combined domestic sales was 107,004 vehicles last month, up 8.3 percent from 2013.

By company, Hyundai Motor, the nation’s largest automaker, saw its domestic sales rise 8.2 percent year-on-year to 51,380 vehicles in February, thanks to sales of its full-size sedans, Grandeur and the new Genesis.

The Grandeur, including a hybrid model, sold 7,496 units last month, defending its monthly sales crown for this year, while the second-generation Genesis sold 4,164 units, a more than 340 percent increase from last year.

Hyundai’s small affiliate, Kia Motors, had a 6.4 percent year-on-year increase, selling 35,000 units last month in Korea. The country’s second-largest automaker was the only company that didn’t report a domestic sales increase in January.

No. 3 player GM Korea managed to have its eighth consecutive month of year-over-year sales growth after selling 10,301 vehicles in the domestic market in February, which was an increase of 3.3 percent from 9,973 vehicles sold in the same month last year.

“While the mathematics suggest single-digit growth, this was attributable to suspending and resuming production of the Damas minivan and Labo minitruck,” Marc J. Comeau, GM Korea’s vice president of Vehicle Sales, Service and Marketing, said through a release.

However, in overseas sales, not all automakers did so well. The five companies sold 582,096 vehicles in February, which is a 5.3 percent year-on-year increase, but GM Korea and RSM had a sharp drop in their exports.

GM Korea reported that it shipped 48,007 vehicles overseas, down 18 percent from a year ago.