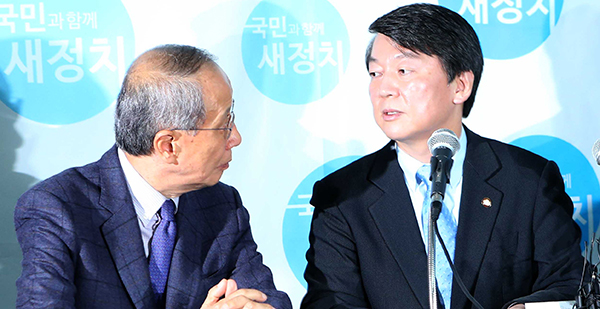 A day after the Democratic Party and independent lawmaker Ahn Cheol-soo announced a breakthrough deal to form a new united party - a move that has the potential to upend the current political landscape - questions have emerged about the entrepreneur-turned-politician’s leadership style.

Concerns stem from the fact that Ahn has previously retreated in past election campaigns: first, during the race for the Seoul mayoral by-election in 2011, and a second time in the 2012 presidential election, when he gave up his candidacy to throw his support behind Moon Jae-in, the Democratic candidate, just a month before voters went to the polls.

On Sept. 6, 2011, Ahn yielded his bid for Seoul’s top post to incumbent Mayor Park Won-soon, despite his overwhelming support among voters in the city. It is widely speculated that Ahn could have easily won in the by-election had he decided to run.

Ahn made a similar move just a year later, when he announced his withdrawal from the opposition bloc’s nomination race to yield a bid to Moon on Nov. 23, after Ahn’s group and the Democrats hit a stalemate over a set of procedures determining candidacy.

The independent lawmaker’s rather abrupt and unilateral decision at the time surprised and dumbfounded his supporters.

This time, Ahn reneged on his pledge to create a new political party different from the current political establishment, instead merging his forces with those of the DP, the main opposition that Ahn had long argued was part of the country’s “old style of politics.”

Ahn’s failure to follow through on his promise has prompted talk among political experts over whether he was keen on avoiding risk or if his decision was just a strategic revision from his original plan to strengthen his political standing.

“Ahn is a person who would rather follow the trends of social issues created by others than take the lead in formulating it,” said Hwang Sang-min, a professor of psychology at Yonsei University.

“It was the DP that first proposed the merger to Ahn. It seems that he is more used to having someone else create a forum for big changes.”

At the National Assembly yesterday, no sign of serious rift within the DP was evident, though it remains to be seen whether all 126 members of the opposition will follow Chairman Kim Han-gill’s lead in creating a new party in harmony with Ahn’s political camp.

From Ahn’s camp, one senior figure made it public that he will not join the new coalition. Kim Sung-sik, a former Saenuri lawmaker who served as a co-chairman of Ahn’s committee to launch the New Political Vision Party, in the making until Sunday’s announcement, posted on his blog that he will leave the group, saying he will reflect about the need to bring change to the political arena.

The minority liberal opposition Justice Party also made it clear yesterday that it will not take part in the new coalition.

While welcoming the breakthrough deal to unify to shore up political force against the governing party, Sim Sang-jeong, a floor leader of the Justice Party, which holds five seats in the assembly, questioned whether Ahn’s decision was politically and ethically sound.

“Ahn promised to create a political party that would last a century and reform and transcend the political establishment,” Sim said yesterday at the National Assembly. “But less than two weeks after his promise, he decided to merge with a major party that he had just defined as a party in need of strong reform.”