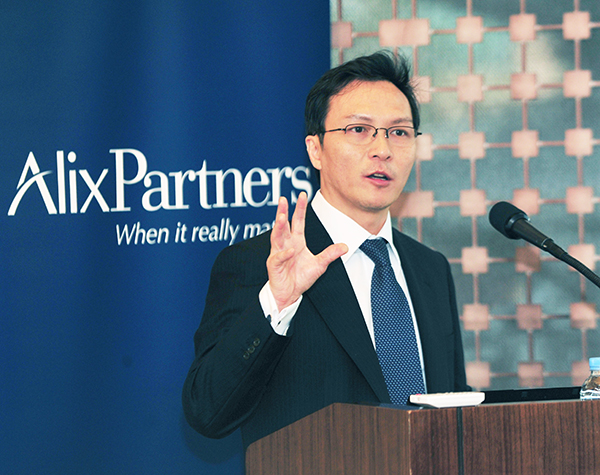 Yung Chung, managing director at AlixPartners in Korea, gives a presentation at the Westin Chosun Hotel in central Seoul. Provided by the company

More than a fourth of listed companies in Korea are at risk of distress, according to an analysis by AlixPartners, a global business advisory firm, released yesterday. Companies facing the most risk are in shipping, finance, construction and real estate.

Based on the findings of the so-called corporate distress index by AlixPartners, 26 percent of a total 1,606 listed companies in Korea “have a high probability of distress within three quarters.” Of those 26 percent, 17 percent are “on alert” and 9 percent at “high risk.”

The index is based on the firm’s early warning model, which was developed in the early 2000s. The index for each company is identified based on financial information and stock price. The latest index is based on companies’ third quarter data.

“Our corporate distress index could be used by financial institutions like banks, security and asset management companies, conglomerates and their holding companies, the industrial market and the government for sovereign fund management and national industry portfolio restructuring,” said Yung Chung, managing director at AlixPartners in Korea.

Meanwhile, the advisory firm compared Korea’s index to that of other countries like Japan and Singapore, saying there are more companies in Korea at high risk of distress.

According to AlixPartners, Korea has a higher share of high risk companies than other developed markets in Asia. In Japan and Singapore, only 2 percent of listed companies are at high risk. The analysis also showed that in Korea, the distress level is highest in industries like shipping and finance, while in Japan the level is high in electric utilities sector that was affected by the 2011 earthquake and tsunami. In Singapore, mainly IT-related companies, particularly those engaged in electronic parts and computer programming, were in the high risk category.

For Korea, considering that the distress level hasn’t improved much for many of the listed companies compared to the fourth quarter of 2012, AlixPartners urged companies to restructure more quickly if necessary. Based on the 2012 index, 27 percent of companies were in the “at risk” group.”

“This reflects the fact that economic conditions at large in Korea haven’t shown significant recovery, which has been complicated by an unstable exchange rate with Japanese yen,” the company said in a statement.

“What we call holistic turnarounds -- operational as well as financial restructuring -- need to be taken preemptively before more companies fall into distress,” he said. “Korean companies have mostly been focusing on financial restructuring alone, along with the disposal of core assets to meet urgent cash needs, rather than on operational turnaround.”

C.V. Ramachandran, managing director and head of Asia for AlixPartners, who was also present at the conference, added that the “current flow of funds and solutions focusing mostly only on financial improvement have only led to more corporate distresses.”