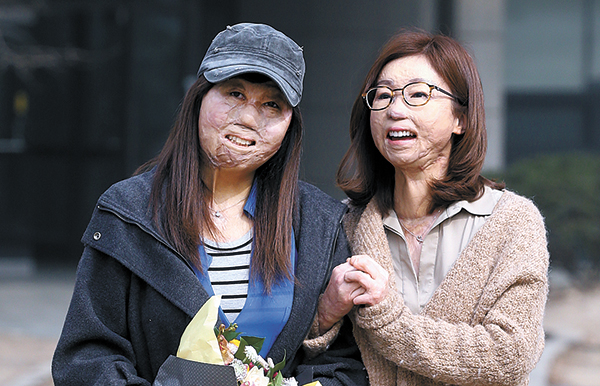 At a matriculation ceremony at Ewha Womans University on Feb. 28, Cui Lina took her oath as the representative of new students in front of the crowd.

Cui, a 22-year-old Chinese freshman at the university, said she had had a significant meeting with Lee Ji-sun, 34, the author of the book “I Love You, Ji-sun,” on the sidelines of the ceremony. Lee entered the university in 1997 and was invited by the school as a guest for last week’s matriculation.

The two women have one thing in common: both suffered disfiguring third-degree burns all over their bodies. Lee was scalded in a car accident in 2000, and Cui was injured in a gas explosion at her home in 2003.

Cui was a member of her elementary school’s broadcasting club and dreamed of becoming an announcer. But the accident turned her life upside down, both because of her physical injuries and the disfigurement that made her afraid of going out among people.

Lee and Cui first met soon after Cui was injured and arrived in Korea for reconstructive surgery, brought together by a magazine publisher who had been following Cui’s story. The publisher found Lee’s website and asked her to meet Cui, saying that words from a person in a similar situation would be much more helpful than those of others. Coincidentally, both were injured on the same date, July 30, three years apart.

“I always felt that there was a bond between us,” said Lee, who said that her experience, similar to Cui’s, helped establish a connection between them.

Cui went through 33 surgical procedures, each followed by a three-month recovery period, and the outcome of each individual procedure was not always successful. During that time, Lee supported and cheered Cui on, assuring her that all would be well in the end.

Cui passed a college qualification test for high school students last April, with help from teachers at the Korea International School in Tianjin, China. Lee, who calls herself a “master of application forms,” also coached her in preparing a resume and cover letters.

“Cui inspired me to live life to the fullest because she endured all that pain at such a young age,” Lee said. Lee also took part in a talk show called “Welcome to Ewha,” one of the entrance ceremony events on Feb. 28, spoke individually to the new students and posed for photos with many of them.

Cui, who is determined to become as successful as Lee in recovering and prospering in her life, is now planning confidently for the future.

“I want to join the university’s broadcasting or volunteer club, as I did before the accident,” said Cui. “I have gotten help from others, and later I also want to feel the joy of sharing with others.”