When it comes to games, Adidas boss means business

When it comes to games, Adidas boss means business 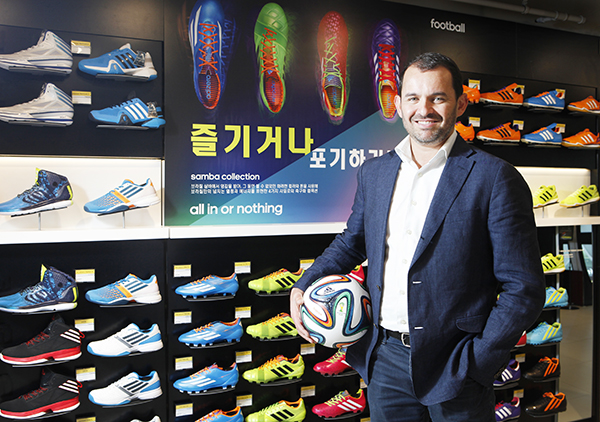 Zion Armstrong, managing director of Adidas Korea, holds a Brazuca, the official ball for the 2014 FIFA World Cup in Brazil, at the company’s flagship store in Myeong-dong, central Seoul. By Park Sang-moon

This is considered a “sports extravaganza year” because of the Sochi Winter Olympics, FIFA Brazil World Cup and Incheon Asian Games. Sports fans are psyched and so is Zion Armstrong, managing director of Adidas Korea.

Not only because he expects more sales of sporting goods - especially football items - but also because he is an avid sportsman. The 39-year-old represented New Zealand in the IAAF World Junior Championships and the Commonwealth Games, specializing in the 400-meter hurdles.

Armstrong said his experience as an athlete has helped him throughout his career. He still remembers what his coach told him at the age of 18: “Winners never quit, and quitters never win.”

Armstrong had no university degree when he started working for Adidas, packing shoes in a warehouse. But, starting from the bottom of the company, he slowly moved up and now manages about 390 employees at Adidas Korea.

Armstrong emphasized that what the company is trying to sell in Korea is not a product, but an experience.

Q. You have spent more than four years working in Korea. What have you learned about the Korean market?

A. When you look into Adidas Group, we have performance and street wear labels. Korea is a very strong sports nation, but at the same time it also has strong fashion, music and hip-hop, as well. So it fits perfectly with our group, and we are very fortunate to be here. It was fantastic for us when Korea finished fifth in the 2012 London Olympics, and when you look into people’s lifestyles and how much they have changed in past four years it is mind-blowing.

Did you find any differences between male and female consumers?

In terms of purchasing power, I don’t think it matters whether you are Korean or from other countries because as soon as you get married, you will have less choice in shopping because your wife will take over [laughs]. It’s definitely not a Korean thing, but a global phenomenon. But for Korean men, you really see a big swing in sales in terms of “well-being,” and guys work out a lot. For women, we see the fitness community expanding beyond traditional sports of yoga and aerobics as they engage in more dynamic sports. What’s unique to Korea is that when something becomes a trend, a large share of the population follows it, whereas in Japan, everyone wants to look different. If you are fortunate enough to create a trend here, it represents a strong business opportunity.

How do you see economy performing this year?

What I consistently remind my team of is that we [Adidas Korea] are in a fortunate position. It’s not the growth that we enjoyed in 2010 and 2011, but it’s much better than other countries around the world like you see in southern Europe and challenges that Italy or Spain or Portugal faced. I don’t see the economy picking up at a rapid pace in this year, although I see steady signs of improvement as the U.S. and Chinese markets are rebounding. But our job is to continue creating desirable brands to win more consumers. If you rewind the clock to 2009, we grew almost 19 percent through fitness and sports. We are little immune to economic slowdown because people always want to stay healthy.

The outdoor gear market has been growing rapidly here, and some people say Korean consumers’ tendency to “show off” really pushed the growth of the market. What’s your take on Korea’s outdoor market boom? 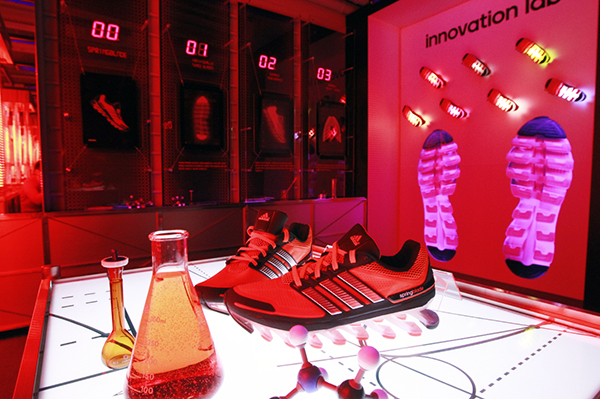 Adidas Springblade running shoes are displayed at a pop-up called “Innovation Lab” at the company’s Myeong-dong store. Provided by the company

It’s a cultural thing. In New Zealand, every Kiwi male must have beautiful barbecue. Even if you have two people living in the house, you need to have the best barbecue. I think for Koreans, especially in Seoul, going to the mountains on the weekend is a stress release, and at the same time, it’s part of culture that you go as families, which is fantastic. They definitely invest in the right innovative products, especially in winter conditions. Adidas obviously recognized that outdoor wear was a growth opportunity. We established the outdoor business unit in 2010, and since then we have enjoyed double-digit growth each year. What’s unique is that Korea is our second-biggest outdoor market behind North America. We will remain focused on our core categories, which are football, running, basketball and Originals, but we are also putting effort into outdoor wear. Especially, we focus on footwear innovations that can differentiate us from other outdoor companies.

Which sports in Korea have a promising future in terms of business?

Running, I believe, has the biggest growth opportunities in the Korean market. Just this Monday, we started accepting entries for the Hangang Marathon, but within a couple hours it was closed. In the past, it took 75 days to complete the field. So there is a signal that running is a booming sport in Korea because everyone can run and it’s a relatively low-cost sport.

However, we’re actually committed to boosting all sports in Korea. Most recently, in the Sochi Winter Olympics, Adidas sponsored the Korean bobsleigh and skeleton teams. We don’t sell any bobsleigh or skeleton products, but we just wanted them to succeed on the biggest stage in the world. If you rewind to the London Olympics, we sponsored Korean archery, judo, fencing, handball and weight-lifting. Adidas is built around Olympic sports. And, of course, we will invest in our major categories like football and basketball. For the World Cup, we have successfully launched the Brazuca, the official ball of the World Cup, which we tested with 600 players around the world.
Consumer purchasing trends are changing with the rise of mobile and online access. How does Adidas handle those changes?

We must continue evolving. Last week, we announced some changes in our internal organization. In the past, we had wholesale, retail and e-commerce, but we blended retail and e-commerce into one team. Consumers today are looking at their smartphones, and they may go to a store to try on and then purchase back on mobile. So, we need to provide a comfortable experience wherever they are shopping. Our new internal organization is now adapted to ensure that we provide that experience whatever shopping destination they go to. In the past three years, since we launched our online platform, online sales have grown 40 percent to 50 percent every year.

What are your thoughts about counterfeit products in Korea?

It’s one of our biggest concerns. We have dedicated people in our legal department working on intellectual property rights, and they are focusing on building government relationships with the customs agency and the Korean Intellectual Property Association. We have consistently provided training to help them understand what’s authentic and what’s counterfeit. As we have been doing this since 2009, we have seen a great reduction in the amount of counterfeits that make it to the market.

But challenges with the Internet booming and mobile accessibility rang a bell, because with offshore purchasing you can’t guarantee whether it is an authentic product. If it doesn’t get stopped at customs, we also have private detectors consistently roaming the areas, and when we do find counterfeits we work closely with local police, who have been extremely collaborative. But right now, in the sporting goods industry, Korea is relatively clean.

From left: Runners in Adidas miRun Busan Marathon cross the Gwangan Bridge. Adidas has sponsored the event since 2012; Participants work out at the Reebok CrossFit Games Asia regional qualification. The fitness program has been a hit in Korea since 2011. Zion Armstrong poses with Korean Bobsleigh and Skeleton Federation members after donating 30 million won (U.S. dollar 28,209) in January prior to the Sochi Winter Olympics. Provided by the company

How do you manage employees?

Adidas Group’s success is based on a team culture. My rules for myself are always to be fair and listen, because the more you listen, the more you learn. Also, always be transparent whether it is good news or bad news. Lots of times when you make a decision, it may not be popular. It’s only unpopular because people don’t understand the reasons why we have to make this decision. But as we communicate it, all of sudden everyone understands and engagement improves. We do an engagement survey every two years.

Our employee engagement level has increased by 37 percent from 2011 to 2013 to reach 70 percent. So, we are going from a mediocre engagement level to a high level. Koreans have a tendency to work exceptionally hard, probably the hardest of anyone in the world. I’m exceptionally proud about our team’s ethics in terms of work culture and passion, but we need to work smarter, making sure that we predict the trends in the future and simplify the way things are done.

What do you want to say to young people who are looking for a job in this difficult economic time?

Along the way in Adidas, I had a lot of knock-backs. I applied for some jobs in the group that I didn’t get. But I’m so glad I had those knock-backs because they taught me how to get back up and carry on. You will face challenges, but it’s about how you react to those challenges and that will mold your future. Never sit still, never stop learning and never give up. Also, surround yourself with good people and be a team player. 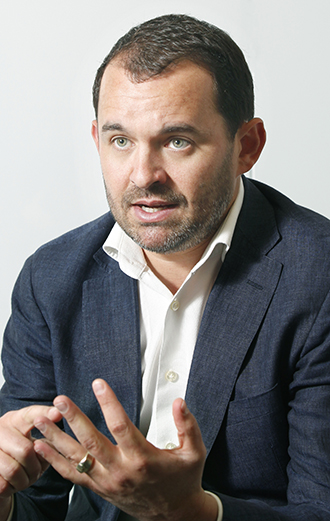