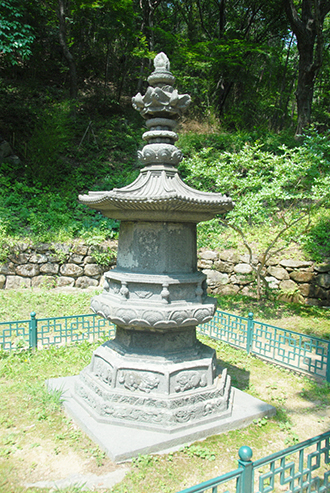 This stupa, an octagonal stupa on a square platform, is located to the east of Yeongoksa Temple.

The temple had been famous for Zen practice, producing renowned monks until the early Goryeo period (918-1392), and it is the site of two other beautiful stupas: the West Stupa (Treasure No. 154) and the North Stupa (National Treasure No. 54).

But this east one is considered the most beautiful and elegant. The stupa has a three-level foundation, with the lower foundation divided into two portions.

A dragon shrouded in clouds and a lion are carved on the upper and lower portion, respectively.

On the upper foundation are elaborately engraved double lotus petals, pillars and most of all Kalavinkas (an imaginary creature mentioned in Buddhist scripts, a person with a bird head).

The overall proportions and outstanding sculptural workmanship are sufficient to make the stupa a masterpiece of the late Unified Silla era.