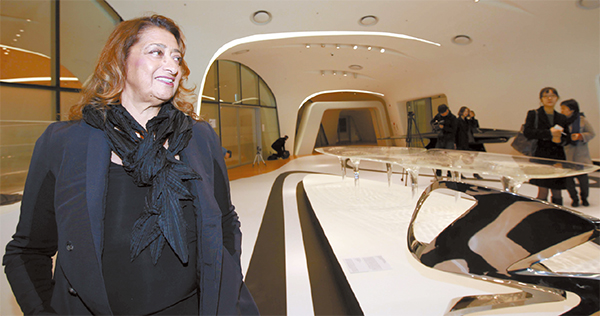 Zaha Hadid, the architect who designed the Dongdaemun Design Plaza, is confident about the controversial new landmark in the heart of Seoul that she designed.

“It is unique to combine architecture and landscape as one item. It is not easy to achieve, that is what makes it quite unique,” said the Iraqi-British architect at a press conference yesterday inside the plaza.

Her comments were an indirect rebuttal to those critics who complained that the building does not fit in harmoniously with its surroundings.

Hadid visited Seoul just before the Dongdaemun Design Plaza opens to the public on March 21. She said she attempted to provide a gigantic plaza that is harmonious with the historic site and the newly organized Dongdaemun History and Culture Park, which was created after the demolition of the old sports complex in 2008.

Overall, she seemed satisfied with how her idea was realized.

“There are obviously some changes and some additions made, but I think it is a very successful interpretation of the diagram,” she said.

“The main idea we had here was to take a building, merge it with the landscape and create some organic unity between the park and the building, and we can see the final execution is true to the original concept and the image,” said Patrik Schumacher, director at Zaha Hadid Architects, which supervised the construction.

Hadid, 63, is well known for being the first female winner of the Pritzker Architecture Prize, often considered the biggest prize in architecture. She designed the Guangzhou Opera House and the National Museum of the 21st Century Arts in Rome, and she is working with Japan to design a stadium for the 2020 Tokyo Olympics.

The Dongdaemun Design Plaza was built entirely by Samsung C&T at a cost of 421 billion won ($398 million) on the site of the now-demolished Dongdaemun Sports Complex. Built in 1925, the sports complex had served as the main venue for sporting events in Seoul for much of the 20th century.

After the Dongdaemun building was unveiled, the reactions were mixed. Some experts gave it favorable reviews for the quality of the building and its unique design, but some others complained that it clashed with its surroundings and lacked historical context.

“The building is very unique for us, for the world, and we are very much aware that there have been doubts and worries because the project seems so strange and alien,” said Schumacher.

“Now, I think the mood is changing as the extraordinary beauty of the project is becoming apparent, and we have always had this experience when we work with something very original and unusual - that there are first doubts and then love develops late.”

The firm noted how it incorporated some remnants of the sports complex, including two flat lights used for after-dark sports events.

In addition to keeping attached to history, Hadid said she also tried to incorporate current urban scenes found in Seoul.

“Throughout the centuries, everything changes, and we [as a firm] have to reconsider what new changes are being made in the cities,” said Hadid. “My adding of some new building is the [result of] me focusing on the changing urban aspect of the cities.”

For those who want to explore Hadid’s ideas, a range of her designs in furniture and home appliances are on display in one of the five special opening exhibitions at the plaza. “Zaha Hadid 360 Degrees” will be on display until May 31 (with 10 days off from March 26 to April 4 as the exhibition changes venues).

Just as her plaza has a round and smooth exterior, many of her smaller designs also have soft edges, including a liquid glacial dining table, chandelier lamps and even shoes.

“The concept is very similar as design firms like ours work on many different levels and scales,” said Hadid. “You have to think about space within the space.”

The Seoul Design Foundation, which worked with Hadid’s team on the plaza, expects that the exhibition will help visitors understand Hadid’s designs.

“The exhibition will [help people] explore Hadid’s multidisciplinary approach to architecture and dynamic application of her creative energy in other fields,” said the curator, Lee Ji-yoon, noting how the development of computer technology and engineering systems were necessary for Hadid’s experimental and futuristic designs.

*“Zaha Hadid 360 Degrees” will be held from March 21 to 26 at Design Experience Zone Lobby at Dongdaemun Design Plaza in Jung District, central Seoul. The exhibition will reopen on April 4 at the International Conference Hall until May 31. Entrance costs 4,000 won for adults, 3,000 won for students.