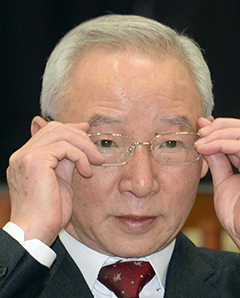 As the controversy over alleged fabrication of evidence against a North Korean defector accused of spying refuses to subside, even the ruling Saenuri Party is suggesting that National Intelligence Service chief Nam Jae-joon may have to step down.

“It’s not a matter that [the NIS] can simply brush off by making an apology,” said Kim Yong-tae, a Saenuri lawmaker, in an interview with a radio show yesterday. “Nam should judge on his own whether his decision would harm the president. Can the problem be patched up without him voluntarily stepping down?”

The second-term lawmaker also expressed concerns that the scandal will harm the Saenuri Party in June 4 local elections.

“When I think of the fabrication scandal, my flesh trembles,” he said. “What if this incident deals a colossal damage to us in the elections?”

Another Saenuri lawmaker, Choung Byoung-gug, who earlier announced he would run for Gyeonggi governor, said via Twitter Monday that “the very fact that the NIS has been the center of media reports for over a year and a half is evidence the agency has failed to truthfully fulfill its duty.” He said those involved with scandals should be held responsible regardless of their positions.

Representative Lee Jae-oh, a senior Saenuri lawmaker, initiated the move within the party to demand Nam tender his resignation. “Stepping down is an act of reacting to President Park Geun-hye’s expression of regret,” he said via Twitter Monday.

But not everyone within the party agrees. “If you want to make the same argument as the [opposition] Democratic Party, do so after migrating there,” said one senior lawmaker who asked not to be named.

North Korean defector Yu Wu-seong, who worked for the Seoul city government, was acquitted last August by a local court of spying for North Korea, though the prosecution appealed the verdict. Recently, charges have arisen that the evidence against Yu was fabricated, specifically records of trips to North Korea. Last week, a man linked to the records unsuccessfully attempted suicide in Seoul.

Meanwhile, the Democratic Party has raised the level of criticism against President Park, as well as the head of the spy agency, a former Army Chief of Staff who was appointed in March 2013, a month after the president’s inauguration.

“The president not taking responsibility, nor demanding responsibility, is an outright dereliction of duties and denial of public sentiment,” said Jun Byung-hun, floor leader of the party. Representative Ahn Cheol-soo, an independent lawmaker who is merging his new party with the Democrats, also demanded the government fire Nam.