‘Tin can’ computer buyers are OK with no OS

‘Tin can’ computer buyers are OK with no OS 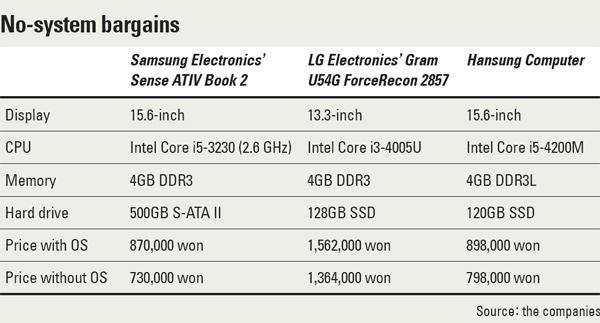 A 28-year-old surnamed Kim recently bought a laptop computer to use at the venture company where he will start work next month. He scrutinized products on online shopping malls, comparing the prices and features of various models before deciding to buy a “tin can notebook,” or a laptop without any operating system (OS).

“Because it did not have a pre-installed operating system such as Windows 8, I could purchase it at a discounted price,” says Kim. “I can install the OS I used with my desktop [PC] on the laptop computer.”

According to computer retailers, sales of OS-free laptop computers are on the rise. The popularity is such that Samsung Electronics and LG Electronics, which has previously ignored them, are now putting out OS-free versions of their laptops.

The trend has surprised many in the industry because it takes some effort - and know-how - to buy and install an OS and find drivers compatible with graphics and sound cards.

Last month, Ultrabook computers from Hansung Computer, a small manufacturer in Korea, were the best-selling digital products on 11Street, an online shopping mall run by SK Planet. Ultrabook is a super-slim, lightweight laptop.

The company’s two models - ForceRecon U33X 1357 and ForceRecon U34X 2350 - combined for sales of 7 billion won ($6.6 million). Both are OS-free products. That feature, and cheap Chinese components, helped lower their prices far below many notebooks sold by large companies.

“Most laptop computers popular on the Internet shopping malls are Freedos computers,” said an official of the 11Street, referring to free-OS computers.

“Seven or eight years ago, you could find such a computer only at Yongsan electronics market, but now most PC manufacturers are making Freedos computers,” the official said.

According to industry watchers, sales of OS-free computers make up 30 percent of laptop sale in Korea. The prices are about 100,000 won to 150,000 won less than OS-equipped computers. Gram, a laptop brand recently introduced by LG, is 198,000 won cheaper without the OS.

The growing popularity of Linux and other free operating systems is helping to boost the popularity of OS-free computers. The increasing number of OS-free laptops by large companies, which provide a better after-sales service, is also boosting the trend, industry watchers say.

It’s notable that an overwhelming majority of customers are young people.

“Because it is complicated to install the OS, young people who are good at using the PC are buying Freedos notebooks,” said Ryu Jung-jae, marketing chief at Hansung Computer.

However the popularity of OS-free products is fanning the illegal use of operating systems, some industry watchers say.

“You need to check whether there is a genuine Windows product available for general users before buying Freedos products,” said an official of Microsoft Korea.