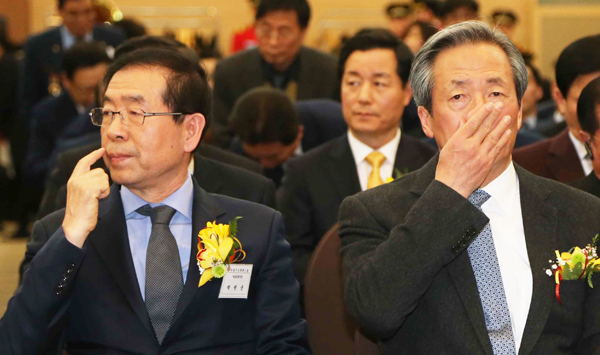 Most recently, the two political heavyweights from opposite poles of the political spectrum clashed over the Yongsan international business district development plan, which collapsed last year.

Mayor Park, who belongs to the main opposition Democratic Party, raised questions Monday about Chung’s plan to revive what was once one of the nation’s biggest development projects.

Chung unveiled his plan a day earlier in an interview with a local daily.

In regard to Park’s objection on Monday, Chung told reporters the following day, “Everything in the world can be done by someone who thinks it possible.” He added the project would be carried out step by step and would eventually be something that benefits all Seoul citizens.

Then the Seoul city government yesterday issued a statement that was obviously aimed at Chung and his remarks. The statement said that the Yongsan district in central Seoul should be developed depending on the usage of the land within the region and that development of an area that formerly served as a maintenance center for trains should be separate from development of the Seobu (western) Ichon-dong residential area.

The nation’s largest-ever property development initiative was jointly led by the Seoul Metropolitan Government and the state-run Korail starting in 2007. It combined the train lots and residential areas. But after banks hesitated to issue loans in the aftermath of the 2008 global financial crisis, the project went on a downward slide.

A groundbreaking ceremony was held in 2011, but work was suspended the following year amid a capital crunch. The 31 trillion won ($28.9 billion) project was eventually liquidated last year after Korail, the largest stakeholder, decided to revoke the land contracts.

The political mano a mano between the two mayoral candidates began at a New Year party in Dongjak District in southwestern Seoul on Jan. 14, which Park attended as the mayor. Chung was there as the National Assembly representative of the Dongjak B constituency.

At the party, Park commented, “Representative Chung is certainly good at least at soccer.”

(Aside from being the controlling shareholder in the Hyundai Heavy Industries Group, the second-largest Korean chaebol, Chung is a former national sportsman and an honorary vice chairman of the International Federation of Football Association, or FIFA.)

Chung riposted, “Would I only be good at soccer?”

The JoongAng Sunday, a weekly affiliated with the Korea JoongAng Daily, ran an interview with Chung on Sunday in which he said Park’s remarks bordered on disrespectful.

“I usually considered him a polite person but [where Park made the comment] was not a private venue,” he said. “Park also said that my running in the election was good because there would be a lot of banchan [side dishes], and that analogy didn’t sound very good, either.” (The implication was that Chung would be just one among many candidates for the post contesting the election.)

“If I try to return the favor, I would say Mayor Park is a suitable person to run a civic group,” Chung continued. “As a civic activist, he is good at criticizing but seems weak in building a vision.”

The two candidates’ views on development of the city are far apart. Chung prioritizes construction projects to boost the economy, while Park is more focused on stabilizing land prices by issuing the smallest possible number of approvals for development projects.

There are 100 undeveloped plots of land across Seoul and 30 have applied for development projects, according to Chung, but the city government gave approvals to only two.

“The reason Park has rejected the majority of applications is because he fears it will fan real estate prices in the vicinities,” said Chung yesterday. “That is real nonsense.”