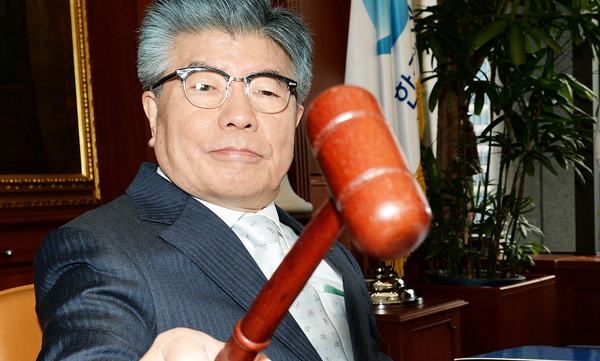 Bank of Korea Governor Kim Choong-soo gaveled the end of his final monetary policy committee meeting yesterday at the central bank’s office in central Seoul. Kim’s term expires at the end of the month.[NEWSIS]

Bank of Korea Governor Kim Choong-soo left the key monetary policy rate unchanged at 2.5 percent for the 10th consecutive month yesterday at his last committee meeting as head of the nation’s central bank.

The last time the central bank made any change to the seven-day repo rate was when it shaved off 0.25 percentage point last May in support of the government’s campaign to boost the economy, which ended up meeting the BOK’s target of 2.8 percent growth in 2013.

With the economy on a recovery track and inflation in the neighborhood of 1 percent, the central bank governor took a cautious stance before yielding to his former deputy, Lee Ju-yeol.

Most market experts projected Kim would not change monetary policy in light of persistent risks at home and abroad, such as the U.S. Federal Reserve’s tapering of its bond-buying stimulus program that began in December and record-setting Korean household debt.

While Kim, as he has often in recent months, expressed confidence that the local and global economies are on a recovery path, he also hinted at a lingering potential downside.

“Consumer spending is showing some improvement, and while facility investments in the first two months have been weak compared to the previous quarters, the third and fourth quarter [last year] saw growth of 5 percent each,“ he said. “As the government has set a three-year economic plan, it wouldn’t be a stretch to say that in the second half, [the economy] will see improvement.”

“Consumer prices in all sectors would have to drop [to be in deflation],” said Kim. “In the past three months, consumer price growth was 1.1 percent and the core inflation was 1.7 percent. Before that, [core inflation] was at 1.9 percent for two months. Therefore, it is inappropriate to talk about deflation.”

He added that low inflation was largely due to a significant drop in agricultural produce prices and policy factors such as free child care.

On the global market, Kim said that although risks remain and the Korean economy might be affected by the negative situation in emerging markets, any impact would be unlikely to affect the nation’s economic growth target of 3.8 percent this year.

“In mid-April, the IMF [International Monetary Fund] will announce its outlook for the global economy,” he said. “Advanced economies will see a slight improvement, but emerging market economies will see some difficulty because of unstable political situations.” He added that though this would have some influence on the Korean economy, it wouldn’t be much.

The governor again addressed the country’s expanding household debt, which at the end of last year stood at 1,021 trillion won ($956 billion). “Household debt itself won’t develop into a major crisis that would destabilize financial markets,” he said.

But he acknowledged that the domestic market could be hurt by the debt burden’s effect on consumer spending. Even if it takes time, he said, the situation has to be solved by economic expansion that leads to higher consumer spending. He stressed the need for a system that will ease the burden on low income and poor credit borrowers, and a stronger safety net.

The governor, however, said adjusting the monetary policy rate to ease the debt burden would not be appropriate.

As his time as governor winds down, Kim said he has no specific regrets. “I was under extreme pressure as I wasn’t confident about making predictions,” he said. “Because in the past four years we were in a major crisis that comes once every century, the global financial market changed rapidly.”

He did say he tried to implement organizational changes to raise competitiveness. Although Kim was criticized for a lack of communication both within the organization and the market, many have given him credit for his efforts to change culture of the central bank, including establishment of a communication department.

“The Bank of Korea is a central bank [whose purpose is to serve] the people and not the people who work at it,” Kim said. “I tried to lower the barriers between society and the bank, and I believe the employees are contributing to the nation’s economic development.”

He said he has spent a lot of time and energy trying to improve communication.

“For me, ending my term with the passing of time is a huge blessing,” he said.