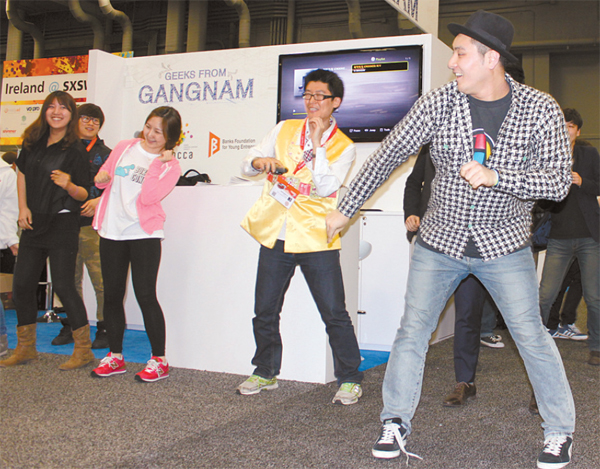 Employees of Korean start-ups participating in South by Southwest perform a flash mob during the trade show in Austin, Texas, on Tuesday. By Choi Joon-ho

AUSTIN, Texas - The Austin Convention Center was suddenly blasted by the sound of K-pop singer G-Dragon’s “Crooked” on Tuesday, and a host of young Koreans began to dance.

Many of the moves were amateurish. No wonder: these were employees of Korean start-ups who had come thousands of miles to sell some business ideas, not pitch their dancing talent.

But they drew a loud round of applause from the audience for their seriousness and enthusiasm, brightening up their hopes of exposing themselves to the world at South by Southwest, or SXSW, which has grown into one of the world’s largest creative content fairs.

The companies were brought to Texas by the Banks Foundation for Young Entrepreneurs and the Korea Creative Content Agency. The start-ups, which survived a 12:1 competition to get tickets, included Wantreez Music, a music service provider, and FiveThirty, a mobile game app developer.

Many Koreans still associate SXSW with film and music. Indeed, many Korean singers and bands visited 2014’s SXSW to perform.

But over the past several years, the festival has evolved into a comprehensive youth festival. Trade Show, where IT and cultural content are being bought and sold, has become an integral part of the event.

The show paved the way for companies such as Twitter, Foursquare and Pinterest to become successful global companies, and 10 Korean start-ups are now knocking on the door of the festival with the same aspiration. A total of 1,034 of the conferences held during the festival are related to starting up businesses.

The Korean start-ups set the Korean booth up under the nickname “Geeks from Gangnam.” The geeks drew more attention than expected.

Wantreez Music had a Walmart marketing official brought over. The official, according to the Korean company, said he thought it was a good idea to use music provided by Wantreez at Walmart branches and would consider it. Officials from recording companies such as Sony also approached Wantreez.

Founded in 2012, Wantreez Music has been providing background music to around 10,000 outlets of 80 Korean companies such as Lotte Mart and Coffee Bean Korea. The B2B music provision business was previously dominated by large music service companies, but their services were expensive. Lotte Mart, for example, was paying more than 1 billion won ($935,016) in royalties for its background music.

Wantreez Music lowered the cost by using music with open or expired copyrights. It has also created customized advertisements for its corporate customers.

“We have good feedback in Korea, but the stage that we are really dreaming of is the world,” said Noh Jong-chan, head of Wantreez Music.

Peter Vesterbacka, Angry Birds’ creative director, met the representatives of FiveThirty, who invented the origami app Let’s Fold. Vesterbacka said he liked it because the game is not violent and people of all ages can enjoy it.

He said he wants to make a partnership with Five Thirty and set up an appointment for a meeting between FiveThirty and the Korean branch of Rovio, the maker of Angry Birds.

Eric Jones, director of business development at Warner Bros, also visited FiveThirty and showed interest in turning characters such as Batman and Superman into origami characters.

Let’s Fold has had more than 10,000 downloads since the company posted a test version on the game zone of Naver, Korea’s largest web portal.

This is the second time Korean start-up companies are participating in SXSW. Last year, the Banks Foundation for Young Entrepreneurs brought seven start-ups to the event.

“Unlike the Mobile World Congress or International Consumer Electronics Show, SXSW is a festival where start-ups, not large companies, play host to and receive the spotlight,” said Lee Na-ri, head of the entrepreneurship center of the Banks Foundation for Young Entrepreneurs.