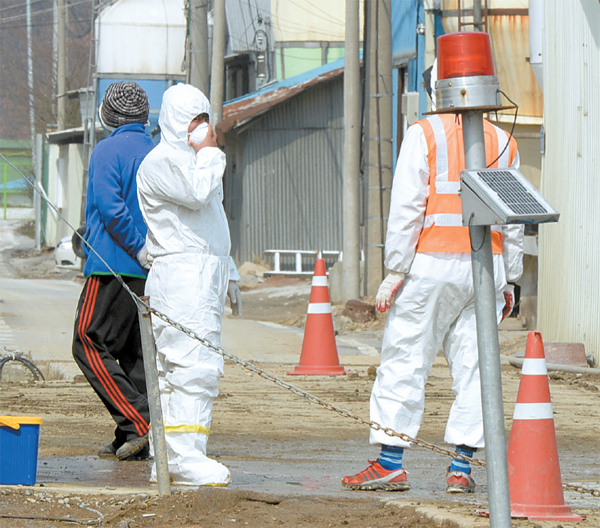 Quarantine authorities visit an AI-infected farm on which a dog tested positive for antibodies of the H5 strain of the disease yesterday. The authorities say it is the first case in Korea in which bird flu was transmitted to another species and that they are checking for possible human infections. [NEWS1]

Avian influenza continues to pose a considerable threat to Korea.

The AI virus in the carcass of a wild goose found this week on Cheonggye Mountain in Gwacheon, Gyeonggi, was confirmed yesterday to be a highly pathogenic strain, putting the capital city in its range for the first time.

And a dog raised on an AI-infected farm tested positive for antibodies of the H5 type of bird flu.

The Seoul Metropolitan Government said yesterday that the Animal and Plant Quarantine Agency confirmed the virus that probably killed the wild goose was highly pathogenic. As a result, poultry farms within a 10-kilometer (6.2-mile) radius were prohibited from moving their birds, including eggs.

It was the first time this year that Seoul was included in the 10-kilometer radius. Parts of four southern districts of Seoul - Dongjak, Gwanak, Seocho and Gangnam districts - are within the radius.

An official of the city government, however, said the authorities are not going to restrict the movement of people and vehicles, as they did near some AI-infected poultry farms, because there are no farms in the districts, although there are households that raise poultry to consume on their own. The official added that the total number of birds raised in the districts was confirmed to be 188 from 16 households.

The official said the local government is planning to implement similar measures on 57 farms raising about 800 poultry in other parts of Seoul to prevent AI from spreading.

Seoul Zoo in Gwacheon, only 1.4 kilometers from where the goose was found, decided to close again on Wednesday after the virus in the goose was confirmed to be of the H5N8 strain.

A dog raised in an AI-infected farm in Cheonan, South Chungcheong, was found to have antibodies of the H5-strain of the AI virus, meaning that the dog was infected by the virus. The authorities suspect it is the first case in Korea in which AI was transmitted to another species, from bird to mammal, although the dog reportedly showed no symptoms. The farm was infected by bird flu in February and culled all of its poultry.

“The virus is known to be not infectious within the same species [other than birds],” said an official. “But we are carefully looking into the case.”

The authorities are performing an investigation into how the dog was infected and are taking samples from people who worked at the farm to check for possible human infection.