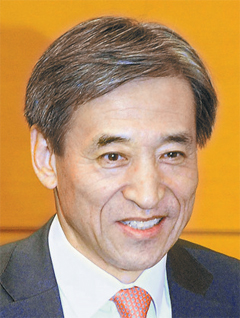 The nominee for central bank governor says the financial market would be unlikely to be significantly affected by a slight rise in the monetary policy rate, while there is only a limited possibility of deflation.

The comments were included in written responses by Lee Ju-yeol to questions from lawmakers in advance of the public hearing on his nomination tomorrow.

The former Bank of Korea senior deputy governor is the first governor nominee to face questioning on his qualifications and ethics by lawmakers in the central bank’s 60-year history.

Lee acknowledged the household debt situation is worsening. However, he said that even if the key monetary policy rate were raised, the interest burden would likely remain tolerable.

“Household borrowing is mostly centered on the upper-income classes and therefore the possibility of a massive insolvency is unlikely,” Lee said.

Lee’s comment was interpreted in the market as a sign that he would raise the seven-day repo rate, which has remained at 2.5 percent for 10 consecutive months. Outgoing central bank Governor Kim Choong-soo held the rate at 2.5 percent last week at his last monetary policy committee meeting.

With the debt continuing to break records, it has been considered a ticking time bomb that could disrupt the financial market and the overall economy.

Lee said the central bank came up short in regard to acting aggressively to control household debt expansion, including the timing and range of raising interest rates.

Some have criticized the loose monetary policy under Kim as a contributing factor to inflating household debt.

Earlier, there was speculation that Lee, unlike his predecessor, would be hawkish when deciding on the central bank’s monetary policy rate, prioritizing inflation control over economic expansion. This means Lee could tighten the monetary policy rate in the near future, and he emphasized that the central bank’s main role is to control inflation, while waving off any concerns about deflation.

Several market experts have raised such concerns as the economy has been expanding slowly and inflationary pressure falling.

“Consumer prices are at a low level, but as it is on an upward momentum it wouldn’t be right to say we’re faced with deflation, where consumer prices fall continuously,” Lee said. “Once the economy picks up, there will be upward pressure from the demand side and expected inflation will be somewhere in the 3 percent range.”

The U.S. Federal Reserve’s tapering of its bond-buying stimulus will contribute to Korea’s growth rather than harming it, he said.

He said the tapering could increase volatility in foreign exchange rates and foreign investment. “However, the impact [of the tapering] on the Korean economy has been limited,” Lee said. But noting that the taping indicates the U.S. economy is on a solid growth track, he said that will eventually benefit Korea’s exports.

“If the advanced economies follow their expected course, even if there is an instability in some of the emerging markets, the impact on our exports will be limited,” Lee said.