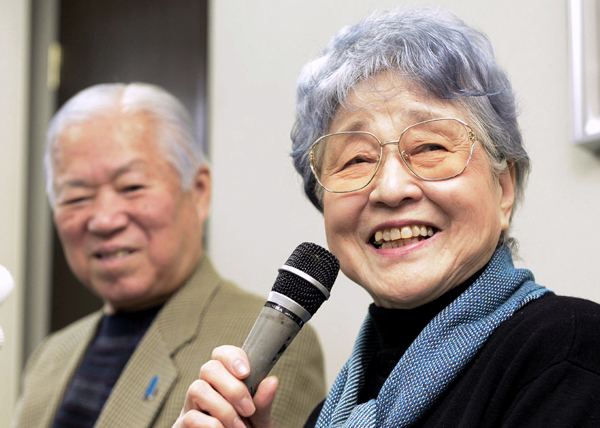 Shigeru and Sakie Yokota, right, the parents of Megumi Yokota, a Japanese national who was abducted by North Korea in 1977, speak at a news conference yesterday in Kawasaki, near Tokyo.[AP/NEWSIS]

TOKYO - After a hiatus of more than a year, Japan and North Korea are set to resume high-level talks over Pyongyang’s nuclear and missile programs as well as the abduction of Japanese citizens decades ago, Japanese media said yesterday.

Media reports come after the parents of a Japanese girl who was abducted by North Korea more than three decades ago met their child’s daughter for the first time.

Japan has still to confirm the resumption of talks, but Prime Minister Shinzo Abe declared his government’s commitment to find closure for families who were the victims of kidnapping.

“The Japanese government has been working hard to realize the meeting from a humanitarian point of view. ... We are determined to do our utmost to resolve the abduction issue once and for all,” Abe told reporters.

The restart of formal talks between senior diplomats is expected to be agreed upon as soon as this week, when more junior officials from both sides meet in Shenyang, China, on Wednesday and Thursday, the Yomiuri daily newspaper said.

Chief Cabinet Secretary Yoshihide Suga, however, declined to confirm the reports, telling a news conference, “Nothing like that has been decided yet.”

Japan’s ties with North Korea have been fraught due to Japan’s 1910-45 occupation of the Korean Peninsula, Pyongyang’s missile and nuclear programs, and Japanese anger over the abduction of its citizens by North Korean agents decades ago.

North Korea admitted in 2002 that it had kidnapped 13 Japanese nationals in the 1970s and 1980s to help train spies and said eight of them had died, including Megumi Yokota, who was abducted in 1977 on her way home from school at the age of 13.

“It was dream-like,” Sakie Yokota, the 78-year-old mother of Megumi, told a news conference on Monday. “What we had long been hoping for has come true. Those were miraculous days for us.”