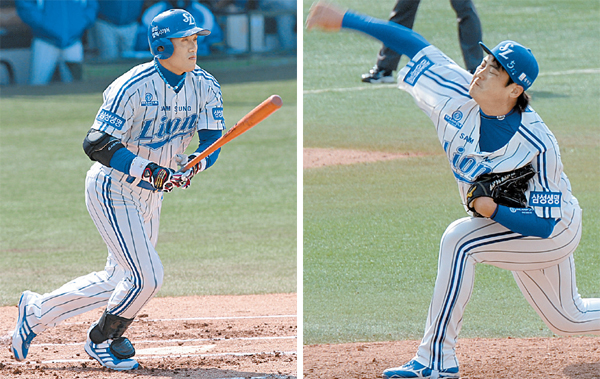 After the craziest hot stove season in the history of the Korea Baseball Organization, in which the league’s nine teams spent a record 53.2 billion won ($49.6 million), the clubs are now in the middle of the preseason, testing their new lineups. The Pickoffs previews the defending champion Samsung Lions and the Nexen Heroes.

The key to the team’s dominance was pitching, especially a bullpen that featured the league’s best closer in Oh Seung-hwan, whose career ERA over nine seasons was 1.69 with 277 saves and 625 strikeouts.

Behind their stellar bullpen, the Lions were 62-0 last season in games where they had the lead in the seventh inning or later. They also were 15-11 (a .557 winning percentage) in one-run games, second only to the Bears (.593 winning percentage).

But that was last year. The Lions will enter the 2014 season without Oh, who left for Japan’s Hanshin Tigers and a two-year, 900 million yen ($8.8 million) contract. To replace him as closer, manager Ryu Joong-il has chosen Ahn, whose 11-year ERA with the Lions is 3.11.

The question is who would replace Ahn if he struggles. Instead of acquiring a foreign closer during the off season, as had been rumored, the Lions re-signed starter Rick VandenHurk, who went 7-9 in 24 games with a 3.95 ERA last season. They also brought in J.D. Martin, who was 16-4 with a 2.75 ERA last season with the Durham Bulls, the Triple-A affiliate of the Tampa Bay Rays.

VandenHurk made one appearance in relief during the Korean Series, and veteran Kwon Oh-joon is still in rehabilitation after missing the entire 2013 season.

There are rumors the club is monitoring veteran side-arm pitcher Lim Chang-yong, a spring training invitee of the Chicago Cubs. In five seasons with the Yakult Swallows in Japan, Lim went 11-13 with 128 saves and a 2.08 ERA. He has 168 career saves in the KBO.

The key to Samsung’s offense is whether veteran Lee Seung-yeop can bounce back after hitting .253 with only 13 home runs. Ryu said he will bat Lee sixth to take some of the pressure off the 38-year-old.

While other clubs tried sign foreign sluggers during the offseason, the Lions added Yamaico Navarro of the Dominican Republic, who Ryu says will either lead off or bat second.

The third through fifth spots in the batting order are owned by Choi Hyun-woo (LF), Chae Tae-in (DH) and Park Seok-min (3B).

Despite a few question marks, it is hard to imagine the 2014 postseason without the Lions. Teams with decent arms don’t fall easily.

Lefty starter Jang Won-sam and right-hander Yoon Sung-hwan still look solid, and their two foreign starters will give the team at least 10 wins each.

The Heroes advanced to the postseason for the first time since the club succeeded the Hyundai Unicorns in 2008.

Their team batting average of .272 was fourth best in the league and the 4.12 team ERA fifth. But since there were no standout free agent pitchers available in the hot stove season, the team re-signed their two foreign pitchers - Brandon Knight, 38, who went 12-10 with a 4.43 ERA, and lefty Van Hekken, who was 12-10 with a 3.73 ERA last season.

The foreign pitchers’ performance is crucial for the Heroes because of their relatively weak Korean starters - Kang Yoon-koo (6-6 and 4.36 ERA), Oh Jae-young (4-0 and 2.40 ERA) and Keum Min-chul and Kim Dae-woo, who are returning from military duty.

On the other hand, the Heroes have a full arsenal of offensive weapons in the league’s best slugger, first baseman Park Byung-ho, who hit .318 with 37 home runs, shortstop Kang Jung-ho (.291 and 22 home runs) and center fielder Lee Taek-keun (.287 and nine home runs).

Added firepower will come from import Vinny Rottino, 32, who played with the Orix Buffaloes in Japan last season and hit .356 with seven home runs and 33 RBI in the team’s 52 minor league games.

The Heroes also acquired third baseman Yoon Suk-min via a trade with the Doosan Bears for Jang Min-suk. Yoon was one of the Bears’ top prospects under former manager Kim Jin-wook, but he was traded to the Heroes days before the manager was fired.

Yoon had a breakout season in 2012, hitting .291 with 10 home runs in 109 games, but was limited by injuries to only 21 games last year. Manager Yeom Kyung-yeop has been testing him in the third spot in the batting order, and Yoon has enough speed to to hit second or seventh.

Throw in Lee Seong-yeol, who hit 18 home runs last season, and the Heroes will be the league leader in home runs, just like they were last year with 125.