With gov’t subsidies, this is the moment to buy an electric car

With gov’t subsidies, this is the moment to buy an electric car 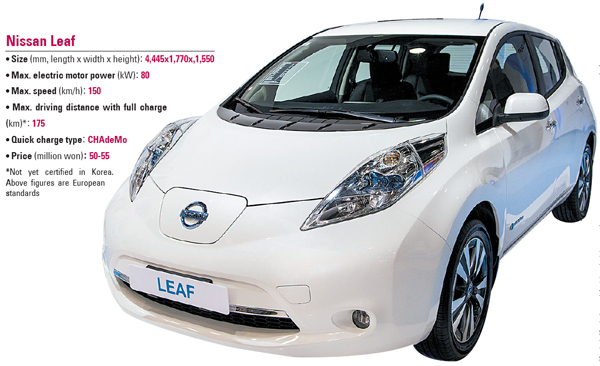 It’s no secret that foreign auto brands have been invading the Korean automobile market with diesels and hybrids.

Now they are deploying a new weapon: electric vehicles.

On Monday, Nissan Korea announced it has decided to release the world’s best-selling electric car, the EV Leaf, on Jeju Island.

The company said it was impressed by the island’s infrastructure and the regional government’s support while participating at the inaugural International Electric Vehicle Expo in Jeju.

Nissan Korea said it will receive its first orders from Jeju residents during the EV Expo, which is currently being held, and is expected to deliver the Leafs around November. Sales in other parts of Korea have not been announced.

The Leaf is the best-selling EV in the world. As of January, the car had sold more than 100,000 units globally since its release in the United States and Japan in December 2010.

“Nissan has been focusing on developing EVs for more than 60 years, and the Leaf is the model that contains our technology and know-how,” said Nissan Korea CEO Takehiko Kikuchi. “I have no doubt that Korean consumers will discover the value of the Leaf, which more than 100,000 owners around the world have already proved.”

The Leaf can drive up to 135 kilometers (83 miles) with a full charge, while its maximum speed can reach 145 kilometer per hour under U.S. standards. The price of the Leaf in Korea should be around 50 million won ($46,700) to 55 million won, according to Nissan Korea. With a government subsidy, the actual sticker price could drop as low as 26 million won.

The Ministry of Environment subsidizes 15 million won for each EV purchase. Previously, most buyers were government ministries or agencies and the subsidy was limited to 10 designated cities: Jeju, Seoul, Daejeon, Gwangju, Changwon, Yeonggwang, Dangjin, Ansan, Pohang, and Chuncheon. This year, the subsidy will be offered nationwide.

The 10 designated cities offer extra subsidies on their own, ranging from 3 million won to 9 million won. 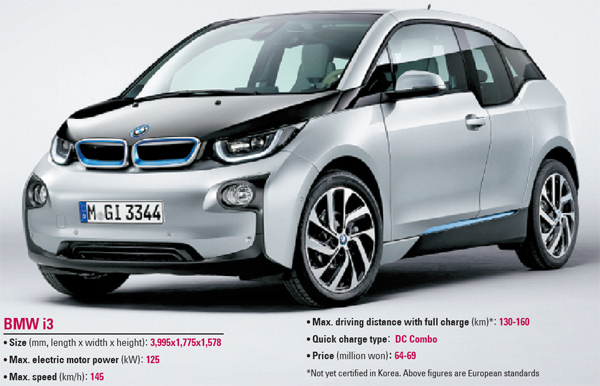 The BMW i3 is fated to be the first foreign EV to cruise the streets of Korea. BMW Korea is scheduled to release the i3 on April 24, but only 250 units will be imported from Germany this year, although local certification has yet to be completed.

The i3 can drive 130 kilometers to 160 kilometers on a full charge, according to BMW Korea. The company said that if drivers use the Eco Pro mode, it will extend the maximum driving distance by up to 20 kilometers, while the Eco Pro Plus mode can give up to 40 additional kilometers.

BMW is moving fast as it tries to set up EV infrastructure on its own. BMW Korea donated 30 EV chargers to Jeju Island last year and recently inked a deal with the nation’s largest discount chain, E-Mart, and Posco ICT to install EV chargers in 60 E-Mart stores nationwide this year.

While the Leaf and the i3 are pure EV models, not modifications of already mass-produced models, their expensive price could be a barrier for local sales. In Europe, the i3 is sold for around 35,000 euros ($48,674) and the Leaf is sold for around $29,000. In Korea, the price is much more expensive without the subsidy support from the Ministry of Environment and regional governments.

The companies say that EV models sold in Korea include more features than ones overseas and that’s why prices are set higher.

A big problem is that the government subsidies are likely to be reduced from next year because the government is set to start program that makes consumers pay a carbon tax if they buy a car that emits high fuel emissions. Under this program, government support for EVs can only go up to around 10 million won per car.

Since exemptions from acquisition tax and other benefits could be reduced from next year, industry insiders say that this year is the ideal time to snap up an EV.

Local EV models boast unique features and services while emphasizing that they are all cheaper than foreign EVs.

So far, RSM’s SM3 ZE, which is the only sedan EV and which was released last November, has been leading the market. According to Ministry of Environment data, of the 780 EVs sold last year, 453 were SM3 ZE models, accounting for a 58 percent market share. In addition, 67 percent of EVs operated in Jeju Island are SM3 ZE models.

The company aims to grab a market share of 60 percent this year because EV purchases, which were previously limited to government use, are expected to be made by average families. RSM emphasizes that it’s the only sedan type EV model, which can be used as a taxi, and also that its warranty will replace the car’s battery if its capacity goes under 75 percent in five years or 100,000 kilometers.

Kia is trying to create demand with its Soul EV, which can drive up to 148 kilometers with a full charge, currently the longest distance among EVs sold in Korea, while attracting customers with the Ray EV, which is currently the cheapest EV model.

GM Korea’s Chevrolet Spark EV, the smallest EV, is offering an eight-year or 160,000 kilometers warranty on the battery and other parts to emphasize its after-sales service.