Phil Jackson returns to the Knicks

Phil Jackson returns to the Knicks 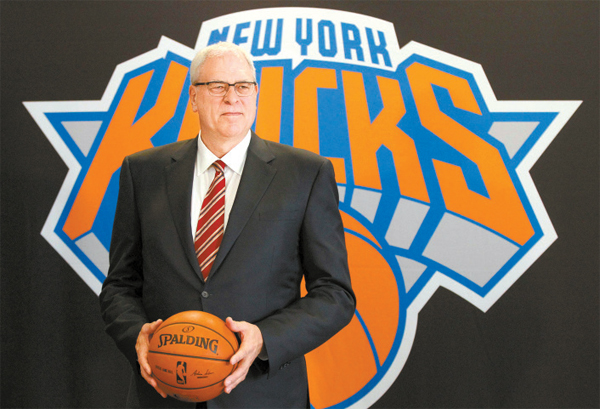 Phil Jackson has returned to the New York Knicks as their team president.

The Knicks announced Jackson’s hiring on Tuesday at a news conference in the lobby of Madison Square Garden, where a giant sign reading “Welcome Home Phil” was overhead and shirts with the No. 18 Jackson wore as a player lined the racks in the merchandise store.

Jackson signed a five-year contract and said he will spend significant time in New York.

“This is the best place to play basketball,” Jackson said.

Jackson was a member of the Knicks’ championship-winning teams in 1970 and 1973, but they haven’t won a title since. Jackson went on to become the league’s most successful coach, winning 11 championships with the Chicago Bulls and Los Angeles Lakers.

This will be his first time as an executive and the Knicks say he will be in charge of all basketball decisions. MSG chairman James Dolan said he “willingly and gratefully” is stepping back to give Jackson the power to make the changes needed.

It’s the second front-office reorganization in six months for the Knicks, who surprisingly fired GM Glen Grunwald days before the start of training camp after he assembled most of the roster that won 54 games last season.

Jackson said he had “no doubt” that Carmelo Anthony could be the centerpiece of the franchise going forward as the All-Star forward prepares to become a free agent this summer.

Jackson will have to decide the future of coach Mike Woodson, who was 72-34 with the Knicks before this season but only 27-40 heading into Wednesday’s game against Indiana.

The Knicks probably would have loved it if Jackson were willing to do the job himself, but he made it clear since his last stint with the Lakers ended in 2011 that he had no interest in returning to the bench.

Instead he will try to show he can handle the transition to the front office, which won’t be an easy one given the obstacles the Knicks face with their salary cap. Amare Stoudemire, Tyson Chandler and Andrea Bargnani will all be in the final year of expensive contracts.