Yoon is sent to Triple-A

Yoon is sent to Triple-A 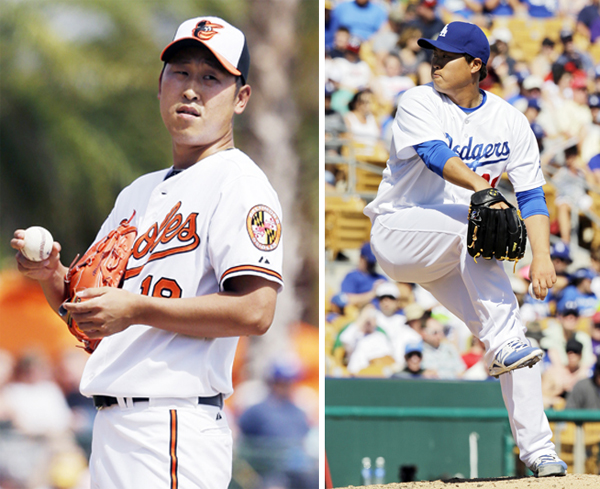 Yoon Suk-min of the Baltimore Orioles was sent down to the minor leagues yesterday after pitching in a preseason game with the Tampa Bay Rays at Sarasota, Florida. He allowed one run, a solo home run, in two innings of work.

The Orioles said they sent the 27-year-old to the Norfolk Tides, the Orioles’ Triple-A team, along with catcher Johnny Monell and outfielder Xavier Paul. After the relegation, 34 players remain in the Orioles’ spring camp.

Those reports also said that Orioles’ manager Buck Showalter wanted to give Yoon more pitching opportunities; visa problems delayed his arrival at spring training, cutting back on the number of innings he was able to pitch in the preseason.

Yoon signed a three-year deal with the Orioles in the offseason, and that contract gave the Orioles the option to send him to minor leagues in its first year. Yoon is guaranteed a spot on the big-league roster in his second and third year with the Orioles.

“I’m not disappointed because I kind of knew that the team was going to make that decision,” Yoon told Korean media. “I signed the deal in February and was able to get a visa only a couple of weeks ago. I’m physically ready because I was preparing for the season with trainers in California before I signed with the team, but I think I need to pitch in more games as a starting pitcher to be back in good shape. I think I have a chance to be called up to the Orioles during the season if I’m prepared like the pitcher that the team expected to see.”

The Orioles currently have settled on four of their five starters - Chris Tillman, Ubaldo Jimenez, Chen Wei Yin of Taiwan and Miguel Gonzalez. Three other pitchers - Bud Norris, Zach Britton and Kevin Gausman - are competing for the fifth spot.

In Yoon’s two MLB games in spring training, he showed his competitiveness as a big-league pitcher. He allowed a solo home run in Wednesday’s two-inning stint against the Rays while striking out one. His high-speed sliders, clocked at up to 137 kilometers per hour (85 miles per hour), were sometimes confused with cut fastballs by play-by-play announcers. His changeup also could be a good weapon to ensure a lengthy tenure in the major leagues.

Yoon pitched one scoreless inning in his MLB debut against the New York Yankees on Saturday.

“He’s not going to start with us,” Orioles manager Buck Showalter said, the Baltimore Sun reported. “We think he’s got a chance to be with us at some point. I think he said the other day when he was talking to us, he needs to go down there and pitch innings, and [the innings] are starting to go away. He needs some time down there against competition.”

Separately, Ryu Hyun-jin of the Los Angeles Dodgers has arrived in Australia for his team’s two-game season-opening series with the Arizona Diamondbacks. In contrast with other teammates such as Zack Greinke, he said he was excited to be there both for the games and for the chance to see his old teammate, change-up master Koo Dae-sung, 44, a former New York Mets reliever in 2005 who now plays with the Sydney Blue Sox.

Ryu introduced Koo to his Dodgers teammates as the teacher who taught him how to throw his changeup, considered as the equal of Cole Hamels’ as one of the best in the MLB.

Ryu learned the grip that Koo uses for his changeup in February 2006, when Ryu was a rookie with the Hanwha Eagles of the Korea Baseball Organization. Koo at the time was back in the KBO after having played eight seasons with the Eagles, four seasons in Japan and one season with the New York Mets.

“I saw Hyun-jin throwing that changeup after less than a month,” Koo said. “He was a fast learner, but I think he was able to adapt to that changeup grip because he wanted it so much and practiced very hard to master it. I taught that grip to many other young prospects, but they hesitated to give up their old styles.”

Ryu said he has learned to throw a curve but sometimes has trouble controlling it. He is scheduled to start Game 2 in the series at 11 a.m. Sunday, Korea time, at the Sydney Cricket Ground.