For couples going separate ways, breaking up is hard to do

For couples going separate ways, breaking up is hard to do 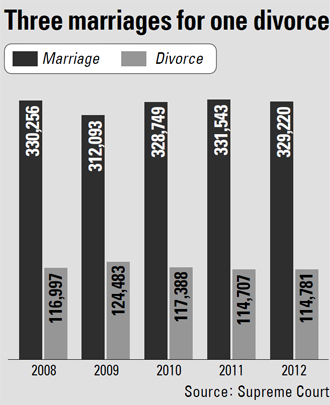 Recently, a couple whose marriage was still fairly young came to Song Hyun-jong, 44, a professional investigator with the Seoul Family Court, looking for assistance.

The husband and wife, both in their 30s, were preparing to divorce. And, after having lived together for five years and being separated for another two, they were looking to tie up loose ends. Specifically, to finalize a custody arrangement for their young daughter.

The husband was concerned because he had been told by his lawyer that judges typically favor the mother in custody battles. Their child was currently living with his wife, who never allowed him to visit, he said. The man further insisted that she was not fit to be looking after their daughter, as the child never complained of missing her when she was with him.

When Song visited the woman’s house, he found that the child - who was capable of going to the bathroom independently - had begun using diapers again because she had started wetting her bed. The professional investigator suspected the girl was severely stressed and worried that her development may be regressing.

When the husband heard about the situation, he silently wept.

But Song advised him to “look at the situation objectively” and disregard his wife’s attitude. Taking the advice, the man gave up some of his conditions in the suit and conceded some of his points for the ongoing custody fight.

These days, in an age where about a third of marriages end in divorce, the issue of how to break up has become more complicated as couples take more into account. And children, immediate family and age only compound the problem.

In 2012, the number of divorced couples stood at 114,781 - about a third of the 320,000 couples who got married the same year. Among split couples, both partners agreed to divorce in 92,331 of the cases. The rest involved instances in which one spouse sought divorce, leaving the court to rule on suits concerning custody, the division of assets and alimony or compensation.

According to Song, one of the major shifts in divorce settlements seems to be the emphasis placed on child custody. And those confrontations have become more severe as more couples select to have fewer children, with many only having one.

“While the divorce settlement itself was more important in the past, couples now are focusing more on the custody of their children,” the investigator said. “If they don’t gain custody, then they wage fierce battles to obtain visitation rights at least.”

Since Song first started working at the court in 2001, he has witnessed more than 1,500 married couples break up. In that year, the Seoul Family Court implemented its current system, in which family investigators like Song are tasked with counseling couples seeking divorce, looking into their home life and offering mediation services.

When asked how they should handle divorce situations, Song replied, “[Couples] need to be easy on their spouses even though they may hate each other. It may not be easy, but they can only think clearly about other issues, such as their children, when they calm down and act rationally.”

They “should also approach their divorce rationally,” he added, “as if they are solving a math problem, to find the answer for a happy ending.”

Song also touched upon international unions in Korea. Over the past decade, those marriages have significantly increased: According to Statistics Korea, cross-cultural marriages doubled from 4,151 in 2005 to 10,887 in 2011. But with that rise, divorces have risen in tandem.

In 2010, Song helped sort out the divorce settlement between a 37-year-old day laborer from Seoul and a 23-year-old Chinese girl who met through a marriage broker. The man paid 10 million won ($9,348) to the company and personally flew to China to bring his new bride back home. Before then, the two had never met.

But the man wanted his money’s worth once they were wed. He wanted to be treated well, especially when it came to sexual relations, and demanded his wife stay home, forbidding her to socialize.

She couldn’t comprehend his ideas and started feeling resentful. Their problems were inevitably worsened by the language barrier, and he became physically abusive. They had been married for only about six months when his wife decided on divorce.

When Song started on the case, the husband claimed the woman had not treated him as a wife should, while she testified that she was treated like a sexual slave and that he beat her.

After a bitter court battle, the two eventually agreed to part ways, deciding on a 2 million won alimony settlement. “There were over 550 annulments last year, and about 80 percent of those cases involved international couples,” Song said. “Because they don’t really know each other before getting married, they tend to get divorced more readily, and the husbands are usually unwilling to give up custody of their children.”

Still, in other cases, parents are the ones intervening in the divorces of their children. The investigator lamented that many young people in those situations relied too heavily on their parents when it came to making most decisions in their daily lives.

Song investigated a case last year, he said, in which a couple decided to split up after their domestic disputes developed into a fight between their families. He advised that married couples be cautious of such developments.

“If divorce becomes a family issue, it means the whole family gets mired in it. [Those couples] must remember that they are still tied together because of their children.”

Another newly emerging trend is the rise in divorce among the elderly, the investigator added. One case Song took charge of involved a man in his early 60s who had retired two years earlier. He had previously held a job that required him to work away from home, limiting his family time to weekends. However, as he spent more time his wife and children, conflicts began to emerge, especially when he stepped into family affairs or intervened in his children’s personal lives.