Solid start to trading of gold on KRX

Solid start to trading of gold on KRX 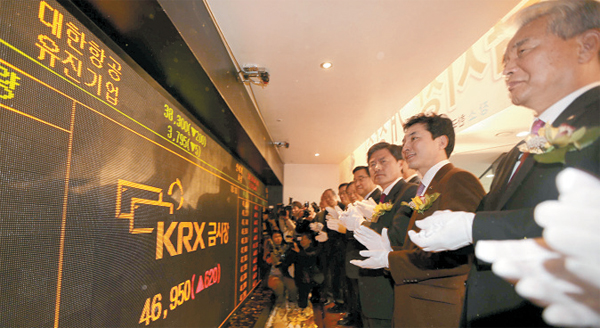 Dignitaries stand before a board showing daily gold trade yesterday as they mark the launch of gold trading at the headquarters of the Korea Exchange in Busan. By Song Bong-geun

Korea’s first official gold trading began yesterday as the government of President Park Geun-hye attempts to steer another part of the underground economy into the light of day.

According to the nation’s stock market operator Korea Exchange (KRX), the gold exchange ended its first day of trading with 5,978 sales. Most of the buyers were retail investors. The volume of gold sold was almost 6 kilograms (13.2 pounds) and the closing price was 49,650 won ($46.08) per gram, 1.34 percent higher than the opening price of 46,330 won.

Previously, only institutional investors were permitted to sell or buy gold holdings in Korea. But starting yesterday, small business owners and retail investors are able to buy and sell gold. The quality is guaranteed by the Korea Minting, Security Printing and ID Card Operating Corporation and gold is kept at the Korea Securities Depository.

Anyone can deposit their gold at the Korea Securities Depository and trade it on the Korea Exchange between 10 a.m. and 3 p.m.

The government is hoping that a bullion exchange market will not only diversify investments available to individuals and contribute to the development of Korea’s financial market but also make gold transactions transparent and taxable.

In the past, a lot of gold trading was under the counter and undeclared to the tax department.

The wealthy have used gold as a means to avoid paying tax.

Roughly 660 tons to 720 tons are believed to be stashed away by individuals. This exceeds the 104 tons kept by the Bank of Korea.

Around 100 tons to 110 tons, worth roughly 5 trillion won at current gold prices, is believed to be traded every year.

More than half is traded illegally, including smuggling in from overseas.

Analysts say the amount of value-added tax lost to the government in the gold trade amounts to 300 billion won.

And with illegal trading, the quality of the gold cannot be assured.

“With the opening of the gold exchange market, the distribution of bullion that was [previously] traded in the shadows will be normalized,” said Shin Je-yoon, Financial Services Commission chairman, who attended a ceremony held at the KRX office in Busan.

Shin stressed that the financial authority will give full support to get the gold exchange on its feet. He stressed that his organization will clamp down hard on illegal bullion transactions.

“The establishment of a commodity market that systemizes a steady supply of high-quality gold will improve the business environment for gold traders,” said the chairman.

Shin said gold will shine as a new investment product even for small investors.

This, however, does not apply to corporate investors. The only tax retail investors have to pay is the value-added tax at 10 percent when they withdraw bullion they purchased.

Investors only have to pay the 0.4 to 0.5 percent service charge levied by the financial companies.