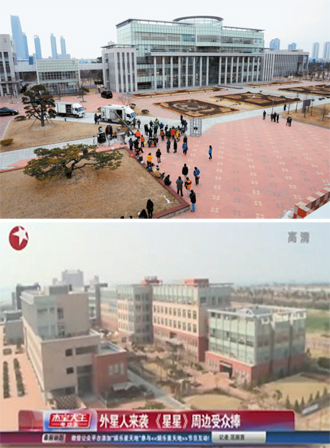 The recent megahit drama “My Love From the Star” has become popular with audiences both at home and abroad, and Incheon National University, one of its major shooting locations, has gained fame thanks to the show’s high ratings.

Important scenes from the drama - such as when Do Min-jun, a handsome professor who happens to be an alien, teaches top actress Cheon Song-yi, and the moment when he reveals that his health is failing him - were all filmed at the university’s Songdo campus.

Several travel agencies have asked the university to open its campus to international visitors so that they can include locations from the drama in their tourist route. Incheon University is responding positively to the demand and is developing a campus tour program that is planning to launch this month.

The university also hopes to prepare various promotions alongside organizations associated with September’s Incheon Asian Games in order to attract more visitors to the area. On-campus photo zones and online and offline events will also be coordinated to further advertise the university to the general public.

“At the Songdo campus, a total of 15 TV programs, commercials and movies were filmed, spreading the beautiful scenery and logo of our university. We gained much publicity,” said Ko Duck-bong, the strategic public relations manager of Incheon University.

“We would like to be considered not just as a famous location but as an attractive university that students are longing to come to. We will take this opportunity to promote the university through various experience programs.”