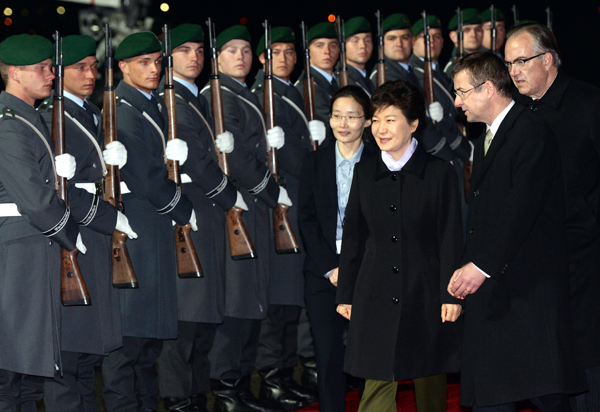 THE HAGUE - Salutations between President Park Geun-hye and Japanese Prime Minister Shinzo Abe appeared stiff on Tuesday evening as the two leaders faced each other for the first time in a trilateral meeting on the sidelines of the Nuclear Security Summit with American President Barack Obama.

She reciprocated with a somewhat serious expression across her face.

The scene was repeatedly aired over Japanese television stations, including NHK. Kyodo News also reported that Park did not accept a cameraman’s request to pose while shaking hands with her counterparts.

A smile was briefly spotted on her face, though, when she shook Abe’s hand, with Obama watching from behind. It was the American president, the host of the event, who got the two to formally address each other after an initial awkward silence.

According to a New York Times report on Monday, Obama contacted Abe on March 6 seeking to set up a meeting between the three of them.

The idea was initially fleshed out by Caroline Kennedy, the U.S. ambassador to Japan.

Before the meeting, the American president also pulled out Park’s chair for her. According to diplomatic sources, she was originally assigned to the center seat, though Obama, as the host, ended up sitting in the middle.

Prior to the three-way talks, the president canceled a few of her scheduled events, as she has reportedly been feeling a little under the weather. She did, however, attend the second session of the general meeting for the Nuclear Security Summit and joined a group photo of attendees ahead of its conclusion.

But Park failed to attend a banquet hosted by Dutch King Willem-Alexander on Monday evening due to symptoms of a cold. She also canceled a meeting with UN Secretary General Ban Ki-moon in the following day, which Foreign Affairs Minister Yun Byung-se attended on her behalf.

Presumably the president’s fatigue has reached its peak: On March 20, just three days before departing for Europe, Park presided over an open discussion session for more than seven hours.

She immediately began preparations for her trip and has allegedly slept a maximum of four hours per night over the past few days.

The president was also given intravenous fluids to speed up her recovery, Blue House officials acknowledged.

Immediately following her 45-minute talk with Abe and Obama, Park headed to Schiphol Airport in Amsterdam to fly to Berlin, her next destination this week.

Germany welcomed the leader of one of its close allies, and her arrival was met with a 21-gun salute at Berlin Tegel Airport. One of Europe’s success stories, it has maintained diplomatic relations with Korea for 131 years.

At the airport, David Gill, state secretary and head of the Federal Presidential Office, and Rolf Mafael, the German ambassador to Korea, were on hand to greet Park. The Blue House said the state secretary’s reception was previously unplanned, though it appears he was sent as a sign of hospitality by the German government.

On Wednesday, Park is scheduled to meet with German President Joachim Gauck in the morning and separately in the evening with Chancellor Angela Merkel, which will be followed by a joint press conference and a banquet.

Merkel, who will host the dinner, has long maintained a friendship with President Park.