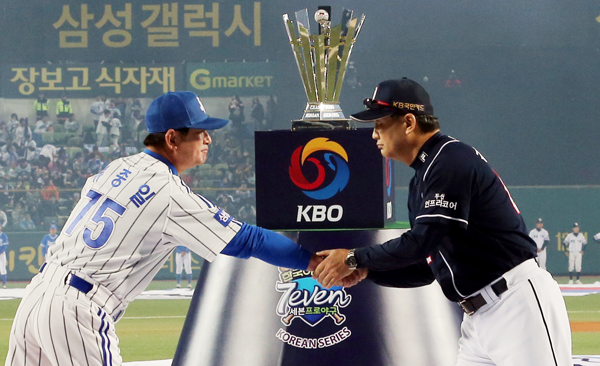 Managers Ryu Joong-il of the Samsung Lions, left, and Kim Jin-wook of the Doosan Bears shake hands before Game 1 of the 2013 Korean Series at Daegu in October. By Kim Jin-kyung

After an action-packed offseason, it’s time to play ball! The Korea Baseball Organization’s 2014 season gets under way tomorrow afternoon, and in the last of a series, Pickoffs takes a look at the prospects of the LG Twins and Lotte Giants.

By any standard, last season was a successful one for the Twins as they advanced to the postseason for the first time in 11 years. Ace foreign right-hander Radhames Liz was the only pitcher who threw more than 200 innings, and the bullpen was better that it had been in years. Offensively, the team’s .282 batting average was good enough for third in the league.

Statistics show the Twins were one of the most balanced teams in the league, so it’s easy to understand why they were not one of the KBO’s more active teams over the winter. They replaced lefty starter Benjamin Jukich (4-6/6.30 ERA) with right-hander Cory Riordan (43-47/4.41 ERA in his U.S. minor league career) and added infielder Josh Bell (.279/106 home runs in the minors).

But the biggest offseason news for Twins fans was the loss of Liz, who signed with the Toronto Blue Jays.

The departure of Liz leaves the Twins without a proven No. 1 starter with a 156-kilometer-per-hour (97-mile-per-hour) fastball who averaged 173 innings of work over the past three seasons. Riordan’s 2.45 ERA in 11 preseason innings looks fine, but his control was erratic (eight walks). While the ace role may be too big for the 27-year-old to fill, he could be a decent middle-of-the-rotation pitcher with 140- to 145-kilometer-per-hour four-seam and two-seam fastballs, curveballs and changeups.

To fill Liz’s shoes, the Twins also will have to look beyond 30-year-old right-hander Ryu Je-guk (12-2/3.87 ERA). He struggled in two preseason games with an ERA of 7.36, though the Twins think he will return to form in what will be his second KBO season.

Sources said the team is close to sealing a deal with a big-name foreign pitcher who may surprise fans with his MLB resume.

Woo Kyu-min (10-8/3.91 ERA) is penciled in as No. 4 in the rotation and the fifth spot will be filled either by veteran Kim Sun-woo, Kim Gwang-sam, Shin Jung-rak or Shin Jae-woong.

Like last season, the key to the team’s pitching will be the bullpen, which turned in a league best 3.40 ERA, and the two foreign starters.

U.S. import Bell will need to produce some long balls and flash some leather at third base to ease the defensive burden on Jung Sung-hoon so he can concentrate on hitting. The Twins hit only 59 home runs last year, better than only the Hanwha Eagles (47).

The Giants used to be the most popular team in the KBO, attracting more than a million fans for six straight years through 2012. Last year, 770,731 fans visited Sajik Stadium.

In addition to their on-field woes, the Giants faced some competition for fans from the expansion of the NC Dinos in Changwon, about 55 kilometers (34 miles) away.

But after opening their wallet in the offseason, this could be the year for a Giants’ turnaround.

Those three will fill the middle of the batting order that used to belong to Lee Dae-ho (now with Japan’s Softbank Hawks) and Hong Sung-heon (now with the Doosan Bears), but they are not better than the former Giants.

Though the team expects him to hit 20 or more home runs and average 80 RBIs per season, Jimenez will be compared to the Giants’ former Mexican superstar Karim Garcia, who hit .283 with 30 home runs and 111 RBIs in 2008.

The new bats should at least take some of the pressure off catcher Kang Min-ho, who often struggled in the cleanup spot last year and will be able to hit fifth or sixth where he is more comfortable. If right fielder Sohn Ah-seob, who will bat third, can replicate his 2013 performance (.345/69 RBIs) and the new faces settle in successfully, the middle of the lineup could be good enough to have Busan fans dreaming of the postseason.

The four playoff spots will go to the Lions, Bears, Twins and Giants.

The Korean Series will be a rematch between the Bears and the Lions, but this time the Bears will come out on top.