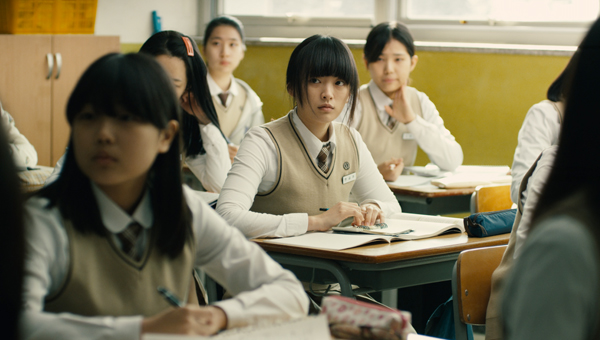 Lee Su-jin’s “Han Gong-ju” tells the tale of a 17-year-old girl who struggles in the wake of a tragedy. Provided by Movie Collage

Anger was the most powerful emotion that gripped filmmaker Lee Su-jin as he filmed “Han Gong-ju,” the tragic tale of a teenage gang rape victim.

“I wondered whether my anger was righteous, or something I’d forget about after a few days,” said Lee at a press screening on Wednesday.

And when he was done dissecting the first response to such a heinous crime, Lee pondered how he’d behave “if victims like that turned up in my life, what could I offer them?”

This rhetoric is something that Lee hopes viewers will ask themselves when the film opens on April 17.

Lee offers a wide range of characters for audiences to relate to - confused classmates, the guilt-ridden, haughty parents and the timid victim, who gets by most days without making much sound.

Weaving in and out of the 17-year-old’s past and present, viewers are allowed to see snippets of the story, but the inner turmoil of the titular character is never fully grasped.

After all, she isn’t given any support and the only person who dispenses advice tells her that her “innocence” in the matter is not relevant and that she should just move on, with or without any support.

“It’s ironic and on purpose that a girl with a name that translates to ‘One Princess’ lives a life that is anything like royalty,” said Lee.

But the tragic lot of Gong-ju has already won over the hearts of many around the world, with the film having won seven awards at film festivals in Rotterdam, Busan, Deauville and Marrakech.

Lee’s depiction on a hand-held camera of the aftermath “for that intimate, young-girl vibe” seems to have worked, even with the gaps that remain unfilled and uncertainty in every frame.

Actresses Kim So-young, Chun Woo-hee, Jung In-sung along with the director Lee Su-jin hope the film will encourage the public to examine sexual abuse from a different perspective. Provided by Movie Collage

“The moment I read the script, I knew it was the role for me,” said Chun Woo-hee, who plays the 17-year-old who had to relocate to a new school in hopes of wiping the terrible incident from her memory.

To pull off the aloof lead role, a girl who seems at a tipping point, Chun said she stopped overanalyzing and let her gestures speak.

“I thought I needed to act in a way to make the viewers think rather than putting it altogether for them,” she said.

It seems that Chun has done a great job, as French actress Marion Cotillard reportedly described her performance as “amazing” while Martin Scorsese also raved about the film at the Marrakech Film Festival, where the film took the best film award.

When asked if the project was easy for a male director, Lee said that it wasn’t particularly grueling, although he did count on the help of women for insights he might have missed.

“From things like the way high schoolers put on their lip balm, I’d ask about things like that,’ said Lee, who consulted with his wife and his actresses over every detail.

“If you were her, would you have done that or this?”

While Lee paints a clear picture of the failings of a society in which the victim is powerless, the director said he wasn’t blaming any particular institution or segment of society.

“I can’t really pinpoint just one thing,” he said, but was hopeful that his film would start a “much needed” discourse.

Although Lee said he based his film on several sex crimes against minors, his film bears the strongest resemblance to the infamous 2004 Miryang case, where a 14-year-old girl and later her younger sister and cousin were sexually abused by 41 high school boys over a one-year period.

The hostile reaction to the girls from their small community was what shocked most people, as the victims were apparently threatened by the boys’ families and townspeople for “shaming” their community. The way the police and other authorities handled the situation sparked many protests at the time.