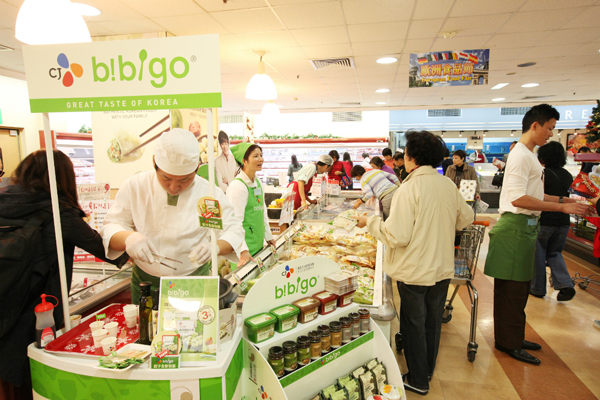 A chef works at the sample stand of CJ’s Bibigo chain in Hong Kong.

CJ Group is quickly achieving success in the international market through a strategy of glocalization - a portmanteau of global and localization - in which the company is harnessing the popularity of Hallyu, or the Korean Wave, to attract customers overseas.

The success of Hallyu entertainment has boosted Korea’s status worldwide, and CJ’s is appealing to consumers who are taking an interest in Korean food and culture as a result.

Citizens in China and Southeast Asian countries, where there is a larger Hallyu fanbase compared to other parts of the world, are CJ’s target market.

And CJ differs from other Korean companies in that it aims its products at people in Southeast Asian nations rather than merely using those countries as production bases.

In addition, the production of Superstar China, using the same format as Superstar K, a domestic singer-audition program in which participants compete, adds to the accomplishments of CJ in China.

The company plans to take further steps to bring a “K-Food Wave” to the international market with its representative brand Bibigo, which sells healthy Korean dishes.

“CJ expects to become the global No. 1 company in the home shopping, bio and movie theater business by 2020,” said a CJ official.