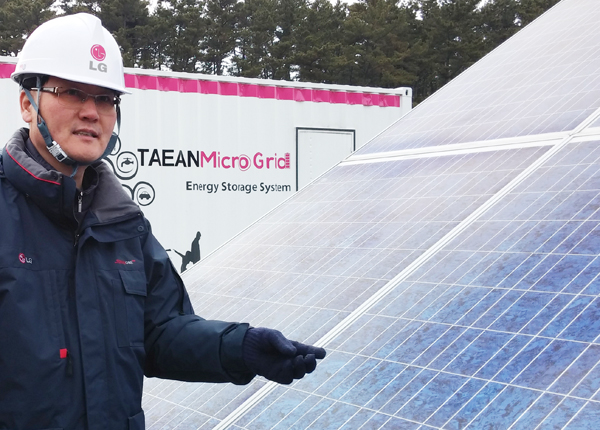 An LG employee explains the Micro Grid Solution, a combined system of solar panels and ESS, at the Taean solar plant, South Chungcheong.

LG Group is working on accelerating the success of its energy solution products by installing them in its factories.

The conglomerate aims to insert solar energy panels on the roofs of 19 of its factories and also plans to equip LG Chem plants in Iksan, North Jeolla, and Ochang, North Chungcheong, with efficient energy storage systems (ESS).

LG believes that establishing and operating these products in its own plants will help it to manage energy efficiency while gaining the trust of potential clients.

Starting from this month, LG’s objective is to install the solar energy panels by the end of the year.

After the installations, LG will become the largest solar power provider in the nation. The energy generated by the solar panels will provide power not only to the conglomerate’s factories but also to the areas surrounding its plants in Paju, Gumi and Ulsan.

LG’s solar energy is expected to generate 22.8 gigawatt hours of electricity - enough to power 7,600 houses in 12 months. The panels are environment-friendly as they create a thermal insulation effect on factories that will save energy used in cooling down the facility during summer.

Also, in July, LG will begin operating ESS at LG’s Iksan and Ochang plants. ESS reduces costs by storing electricity when the need for it is low, using it instead at peak times when demand is much higher and electricity is more expensive. This system is efficient for LG because the production at its plants is increasing at a time when the government plans to raise the price of electricity. The new facilities with ESS are expected to save about 1.3 billion won ($1.2 million) annually for the company and will also help LG deal with power shortages without having to shut down its plants.

While LG Chem is making changes at home, it is thriving overseas. The company is the most competitive business in the international ESS battery industry, according to Navigant Research, with its energy storing technology recognized globally. Just last year, Edison, the primary electricity supplier of Southern California, bought ESS batteries to back up its wind farms and plants.

“The 994 patents related to the ESS belong to LG Chem,” said an LG official. “We will gather the knowledge from all of our subsidiaries and present to the world the eco-friendly and efficient energy solution for the future.”