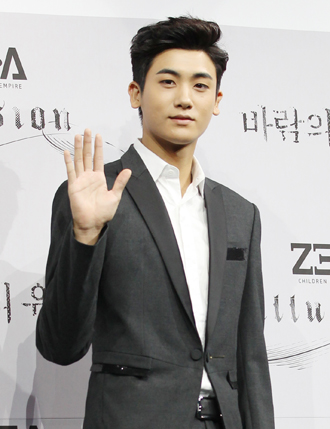 Park Hyung-sik of the K-pop idol group ZE:A is considering appearing in the coming KBS weekend drama “We Are Family!” (working title).

According to the broadcaster yesterday, the production team has already contacted Park’s agency, Star Empire Entertainment, to cast him in the drama. The KBS official said that Hyung-sik’s bright image would be perfect for his role in the story.

Since debuting in 2010 in the nine-man group, Hyung-sik has built a solid resume as an actor, having starred in the acclaimed tvN time-travel drama series “Nine” in March of last year.

In April, he started to appear on the MBC reality show “Real Men,” where he showed his candid side while training in the Korean Army, along with some other celebrities.

Then, in October, he joined the SBS drama series “The Heirs” as the classmate of the lead character, played by Hallyu sensation Lee Min-ho.

“We Are Family!” will be written by Kang Eun-kyung, who was also behind the 2010 drama “King of Baking, Kim Tak-gu,” one of the highest-rated dramas of recent years.

With ratings reaching as high as 50 percent, many media analysts have high expectations for the new drama as well.

KBS said that “We are Family!” is scheduled to air in August.