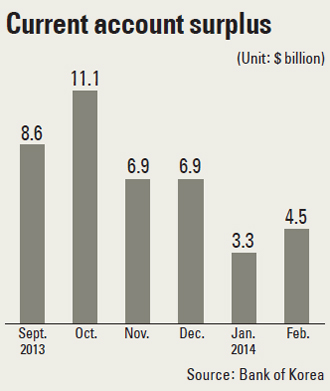 The nation’s current account surplus continued for the 24th consecutive month in February, growing to $4.5 billion from $3.3 billion in January.

The Bank of Korea yesterday said the ongoing surplus was the result of continued expansion of the goods account surplus. However, the increase was partly attributed to the adoption of the new international standard BPM6. As a result, last year’s overall current account surplus added $9.2 billion to reach a record $79.9 billion.

Under the previous system, February would have marked the 25th consecutive surplus. But under the new system, the surplus rally started from March 2012, not February.

Due to the changes, last year’s goods account surplus further expanded to $80.6 billion from $60.7 billion, whereas the services account, which previously reported a $6 billion surplus, has turned around to post a $7.9 billion won ($7.43 million) deficit.

The goods account surplus in February further expanded to $5.4 billion from $4.4 billion in January. Exports in February grew more than 7 percent year-on-year to $48 billion, while imports grew 1.3 percent to $42.6 billion.

Exports of mobile devices, computer chips and automobiles all rose from a year ago, while petrochemical goods and displays fell.

By region, exports to Europe continued to grow in February (10.6 percent), although at a slower pace than in January (23.3 percent). Exports to the United States dropped 6.7 percent in February after slipping 2 percent in January.

Although exports to Japan continued to fall, losing 9.6 percent year-on-year, that was an improvement on the 20 percent dive the previous month.

The services account saw improvement as its deficit shrank to $1.1 billion in February compared to $1.9 billion in the first month of the year, with a worsening deficit in intellectual property royalty payments being offset by improvement in travel accounts.

“We previously projected that this year’s current account surplus would be $55 billion,” said Jung Young-tae, head of the BOK’s economic statistics department. “But with the adoption of the BPM6, we are looking into whether to change the forecast.”