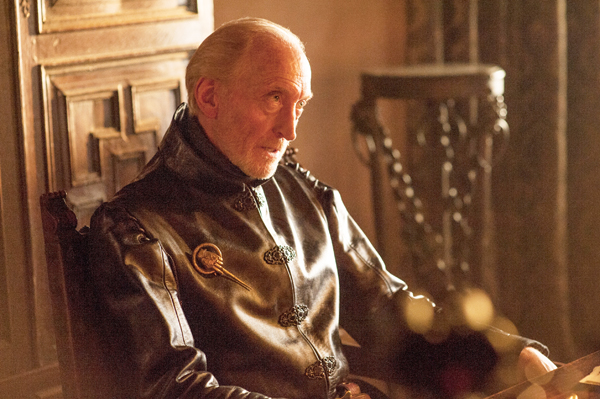 This image released by HBO shows Charles Dance in a scene from “Game of Thrones.” The fourth season premieres Sunday at 9 p.m. EST on HBO. [AP/NEWSIS]

That episode floored viewers with its ritualistic “Red Wedding,” a massacre staged by Lord Walder Frey, the bride’s father, who meant to settle a score with his hall of guests, and did.

“I got quite a shock!” says Dance, speaking for everyone who saw it. “It was bloody in the extreme!”

The fact that Dance was caught off-guard is notable, since he’s a star of the show. Indeed, the character he plays, Lord Tywin Lannister, had a hand in the bloodshed.

But he didn’t actually appear in that episode, “and when I’m not in it, to be honest with you, I don’t read the script,” Dance says. “I catch up on what’s happening when the episode airs.”

“Game of Thrones,” which returns Sunday at 9 p.m. on HBO, will pack its next punch soon enough in the new season. Such is the nature of this epic fantasy, set on a make-believe continent called Westeros, chock-full of warring kingdoms, rugged landscapes, lots of sex and swordplay, and, of course, fire-breathing dragons.

If the scale of the series is vast, the source material is no less sprawling: the five-and-counting novels by George R.R. Martin in the “A Song of Ice and Fire” series.

“I still have not read the books,” says Dance. “They frighten me, books that thick. And, anyway, we’re dealing with an adaptation. I think it’s counterproductive for actors to come to the set with well-thumbed copies of the book their film is adapted from.”

Dance’s despotic Lord Tywin is the grandfather of King Joffrey, an infantile tyrant whose betrothed is the granddaughter of Olenna Tyrell. Lady Olenna is played by Diana Rigg.

On-screen soon-to-be in-laws, Rigg and Dance have known and worked together for decades, including a 1997 British TV adaptation of “Rebecca.” Little wonder they get on famously as they meet with a reporter at a Manhattan hotel.

Rigg says she hasn’t read the “Game of Thrones” books either.

“I rely upon the directors to fill me in before a shot,” she confides. “They’re very good with reminders.”

The show’s dozens of cast members include Peter Dinklage, Lena Headey, Jack Gleeson, Nikolaj Coster-Waldau and Emilia Clarke. Asked what drew him into this elite community, Dance smiles and answers, “The writing was good, the costumes are great and, eventually, the location catering was fantastic.”

“I loved the idea of playing this naughty old bag,” Rigg says, offering her own explanation. “It’s my idea of heaven.”

Now 75, Rigg has had a rich and varied career in theater, both in her native Britain and as a Tony Award winner on Broadway, as well as films including the James Bond caper “On Her Majesty’s Secret Service” and even an NBC sitcom.

But her breakout role was in 1965 in the British TV thriller “The Avengers,” where she played the catsuit-clad karate queen Emma Peel.

“It put me on the map,” she says, “which a lifetime of Shakespeare wouldn’t have done.”

Tall and imperial, Dance, 67, grew up working-class in England and overcame a teenage stammer to devote himself to theater. His breakout project was the 1984 British TV hit “The Jewel in the Crown,” which he followed with such films as “Michael Collins” and “Gosford Park” and the British miniseries “Bleak House,” as well as lots of theater.

His first job: working as a dresser in the original West End production of “Fiddler on the Roof.”

Then he landed a spot in a London repertory company with a crushing regime: “It was 16 plays in 16 weeks. ‘What’s my motivation?’ ‘Your weekly paycheck. Just learn the lines and don’t bump into the furniture.’?”

Learning the lines wasn’t always possible, as when Dance’s mind went blank during a performance of “Charley’s Aunt.” But he was rescued. “A co-star came onstage with a tray. ‘Letter for you, sir.’ And on the tray was the page I needed from the script.”