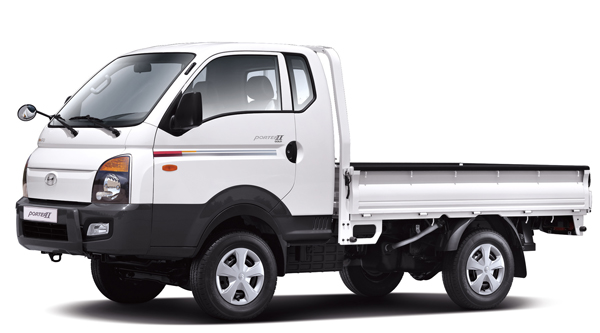 Korean automakers are feeling the spring weather coming with car sales already blooming. For the first three months of the year, the five local automakers - Hyundai, Kia, GM Korea, Ssangyong and Renault Samsung - sold a total of 334,673 vehicles in Korea, up 4.2 percent from the same period a year ago.

Hyundai and Kia, both affiliates of Hyundai Motor Group, are dominating the local auto market, taking nine of the top 10 best-selling cars in the first quarter But the top-selling car for the quarter is not the usual sedan or SUV.

According to sales data from each automaker, the best-seller was Hyundai’s small Porter II truck, which sold 24,515 units from January through March, up 11.5 percent from a year ago.

Another one-ton pickup truck made by Kia, the Bongo III, ranked eighth in automobile sales in this first quarter with 14,180 units sold. Porter and Bongo are the only one-ton Korean truck models.

Industry insiders said that Hyundai and Kia’s small trucks were popular in the first quarter because, unlike other passenger cars, the trucks - mainly used for commercial purposes - are not in competition with imports.

“The commercial vehicle market is as important as the passenger car market,” said a spokesman from Hyundai. “These models have steady demand from customers for business reasons such as delivery, even in difficult economic situations.” 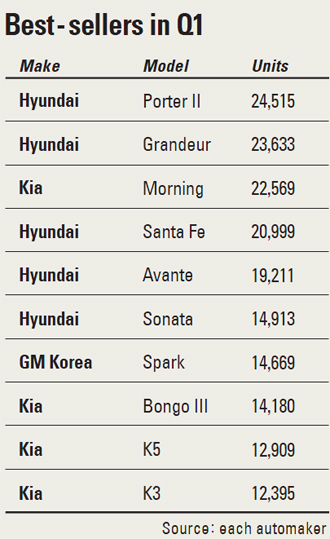 It looks like the steady sales of these two trucks will continue, as the government recently allowed the trucks to be remodeled as “food trucks” that can cook and sell foods such as rice cakes. The move will be made official before this July, which will encourage more entrepreneurs to start their own street-food business.

The runner-up to the Porter II in top sales was the Hyundai Grandeur full-size sedan, which sold 23,633 units. Grandeur, known as Azera overseas, was top seller in January and February. The Grandeur Hybrid, which was released earlier this year, sold 4,180 units in the first three months, making it the highest-selling local hybrid model.

Hyundai Avante, known as Elantra overseas, made a poor showing considering its reputation as Korea’s best-selling car for the past three years. The compact sedan was No. 5 in first-quarter sales rankings with 19,211 units sold.

Hyundai Sonata, the classic midsize sedan, was No. 6 after selling 14,913 units in the first three months, down 32 percent from a year earlier. But Hyundai said that this is because orders were concentrated to the seventh-generation LF Sonata that will be delivered to customers starting this month. At the end of March, Hyundai said that preorders for the LF Sonata surpassed 18,000 units.

GM Korea’s Chevrolet Spark was seventh in sales with 14,669 units and was the only model on the top 10 list that is not made by Hyundai or Kia.

Kia’s K5 midsize and K3 compact sedan also squeezed into the top 10, although its sales were down from a year ago.

Hyundai’s second-generation Genesis was ranked No. 12 in first quarter sales after 11,079 units were sold, a 235.2 percent increase from last year.