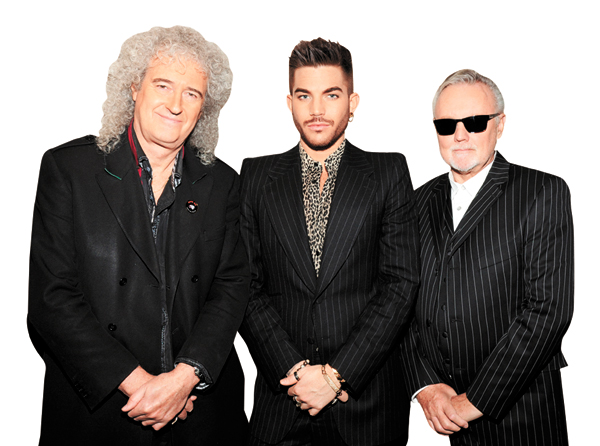 Guitarist Brian May, left, and drummer Roger Taylor, right, of the legendary British rock band Queen will have the band’s first ever live performance in Korea at the Super Sonic 2014 festival in August. Adam Lambert, center, will sing in place of the late Freddie Mercury, the iconic vocalist who passed away in 1991. Provided by PMV Networks

Queen has long been hugely popular in Korea. And this summer, at long last, people here will get their chance to catch the legendary rock group, which is headlining the Super Sonic 2014 music festival in Olympic Park, southeastern Seoul.

Adam Lambert, who rose to fame on “American Idol,” will take over the singing duties in place of the late Freddie Mercury.

From “Bohemian Rhapsody,” to “Somebody to Love,” to “We Are the Champions,” Koreans love all of Queen’s hits, even though the group has never performed here before.

Formed in London in 1971, Freddie Mercury, Brian May, John Deacon and Roger Taylor turned Queen into one of the biggest rock groups in the world, until the death of Mercury in 1991. The band’s “Greatest Hits” record is the best-selling album of all time in the United Kingdom, according to Britain’s Official Charts Company.

For Super Sonic, Queen’s hit singles will be performed by a combination of Adam Lambert, Taylor and May (John Deacon retired in 1997).

Although Lambert is quite new to Korean fans, he’s been performing with Taylor and May since an episode of “American Idol” in 2009, where they sang “We Are the Champions.”

Two years later, they reunited for the MTV European Music Awards and sang “The Show Must Go On,” “We Will Rock You” and “We Are the Champions.” After enjoying great chemistry together over the past few years, the band announced last month that they would kick off a concert tour with the 32-year-old singer beginning June 19 in Chicago.

“People are going to ask whether it’s Queen without Freddie,” Brian May was quoted as saying by Rolling Stone magazine in a recent press conference held at Madison Square Garden in New York City. “Adam isn’t an imitator. We’re going into new territory.”

“I’m honored to be able to pay my respects to Freddie Mercury’s memory,” Lambert said through a press release posted on Queen’s official website.

I am “deeply grateful for the chance to sing such powerful music for Korean fans of this legendary band,” he added.

Roger Taylor showed great excitement for the August show: “I first visited Seoul on a promotional trip in the early 1980s and was so impressed by the architecture and culture. It will therefore be very exciting to finally play a concert and bring the music of Queen to this great city with Adam Lambert.”

This will be the third year for the Super Sonic festival, and organizers say more acts will be announced and tickets will go on sale soon.