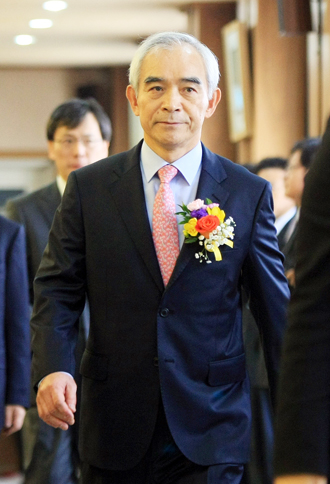 Jang Byung-woo, chief of the Gwangju District Court, stepped down from his position yesterday after widespread public ridicule of a controversial ruling concerning a wealthy businessman.

“More than anything, I lacked insight into what the people were thinking and expecting,” said Jang, 60, at a resignation ceremony attended by some 150 people at Gwangju court. “Though I said that I would try my utmost, I failed to gain sympathy.”

“I once more apologize for the reproof received from the people due to my negligence,” he added, “and take full responsibility.”

Jang offered to resign Saturday after a huge public backlash over a 2010 ruling that allowed Huh Jae-ho, the 72-year old former chairman of the now-defunct Daeju Group, to work off a 25.4 billion won ($24 million) fine by doing prison labor for 49 days, making paper shopping bags, tofu or furniture. That ruling meant that Huh’s labor was worth about 500 million won per day.

Huh was convicted of tax evasion and embezzlement by a lower court in 2007, and Jang made his ruling in an appeals verdict. Huh fled the country for New Zealand and returned only recently when prosecutors began procedures to seize his assets.

Jang claimed he felt “responsible” for the case and wanted to “apologize to the people” after the media lambasted the lenient sentence.

But Jang’s connections with Huh in Gwangju have also been questioned. Jang allegedly bought an apartment from Daeju’s construction company and sold another property to a subsidiary of Daeju. Daeju’s business was based in the Gwangju area.

The Supreme Court said Wednesday that it had accepted Jang’s resignation.

After deliberating whether Jang should be subjected to internal investigation or disciplinary action, the top court said, “He himself declared he wanted to resign, stating it will be difficult to continue in his duties as a judicial official under the circumstances.”

The Supreme Court said that since Jang tendered his resignation, an internal investigation would not be done. It added that allegations that Jang had inappropriate connections with Huh’s group “could not be seen as being related to Huh’s ruling because Jang’s purchase of the apartment dates back to 2007, while Huh’s ruling was in 2010.”

It added “there is no evidence that he conducted illegal acts” in his judicial duties. The Daeju Group was once the country’s 52nd-largest company by assets.