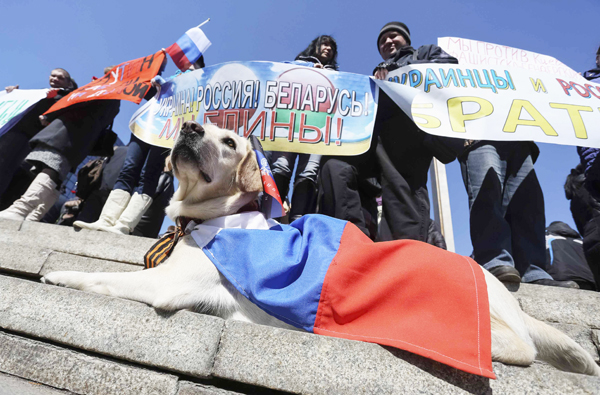 BRUSSELS - In capitals East and West, one question currently looms large: “Who lost Ukraine?” Unfortunately, that is not the most important question to be asking right now.

The more relevant question is how to stabilize the situation in Ukraine. Given that little can be done in practice to dislodge Russia from Crimea, the key challenge now is to keep the rest of the country united and to restart its economy, which is now in a state of suspended animation, owing to unsustainable fiscal and external deficits.

The key reform issues are well known: the price of gas must be increased substantially to reflect its cost, subsidies for domestic coal production must be stopped and governance of the country’s pipelines, which still earn huge royalties for carrying Russian gas to Western Europe, must be overhauled. Ever since these pipelines were effectively handed over to nominally private companies in murky deals, earnings from transit fees have gone missing, along with vast amounts of gas, while little maintenance has been carried out.

All three of these issues are crucial to the fight against corruption. An energy ministry that decides who can obtain gas at one-fifth of its cost and who cannot is obviously subject to irresistible pressures to distribute its favors to whomever offers the largest bribes or kickbacks. The same applies to coal subsidies, except that the subsidies go to the most inefficient producers.

The International Monetary Fund will certainly require Ukraine to reform its gas and coal subsidies as a precondition for implementing its package of financial support (of which a substantial contribution comes from the European Union). The first steps are already being taken, with the authorities recently announcing that household gas prices will rise by 50 percent next month.

But, while abolishing energy subsidies is absolutely essential to balance the budget and put the economy on a sound footing, these steps also risk hitting eastern Ukraine, which contains a substantial Russophone minority, particularly hard. Some there might be tempted by the allure of a better life in “Mother Russia,” with its vast resources of cheap energy.

Eastern Ukraine is dominated by old-fashioned energy-intensive coal and steel industries. But it also harbors some centers of technological excellence, such as the factories that produce important spare parts for Russian military helicopters. The challenge for policy makers will thus be to ensure that the creation of new jobs in these competitive enterprises keeps pace with the job losses arising from higher gas prices and the elimination of subsidies for coal production.

The EU should support this in two ways. It should provide special marketing assistance to enterprises that have suddenly lost their Russian markets. And it should open its markets, not only by abolishing its import tariffs on Ukrainian products, which has already been decided, but also by granting a temporary exemption from the need to meet all of the EU’s complicated technical standards and regulations.

Winning the people’s “hearts and minds” is the key to victory in an insurgency. In the case of eastern Ukraine, winning the support of those who are still nostalgic for the “good old days” must go beyond creating productive jobs that fill their wallets. Here, too, the EU could help this process along.

For starters, it could alleviate the social hardship that will arise when the price for heating alone exceeds household income. At the same time, the EU should help to address the cause of extraordinary heating costs: the woeful energy inefficiency of most of the existing housing stock.

The EU should thus quickly implement a targeted program of social support for the “energy poor,” coupled with financial support for investment in energy efficiency. Experience in Eastern Europe, where energy prices had to be increased substantially in the 1990s, demonstrated that simple measures - such as better insulation, together with maintenance and repair of the region’s many long-neglected central heating systems - yield a quick and substantial payoff in reducing energy intensity. Even a slight improvement in Ukraine’s energy efficiency would contribute more to reducing greenhouse-gas emissions than the vast sums currently being spent to develop renewable energy sources.

But, given widespread government corruption and inefficiency, such a program would have to be administered directly by a joint EU-Ukrainian task force. Nearby member states, especially those whose languages are similar to Russian and Ukrainian, should be able to mobilize quickly the required technical expertise.

Finally, the revenues from the gas pipelines must be returned to the state’s coffers. Here the EU can also play a prominent role by recognizing Russia’s special interest in proper pipeline maintenance and a proper accounting for the gas they carry.

Of course, no one should expect the Ukrainian government to trust the word of a country that has just annexed part of its territory. But, as a confidence-building measure, Russia should be invited into a tripartite agreement under which operational control over the pipelines would be entrusted to the European Bank for Reconstruction and Development, an institution in which all parties have a stake. The EBRD would safeguard the legitimate interests of all parties (including Russia), ensuring the proper operation and maintenance of the pipelines and overseeing the distribution of transit fees.

Regardless of whether Ukraine is “lost,” or who lost it, the country can still offer an attractive future for all of its citizens if unavoidable economic reforms can be made compatible with regional cohesion. The EU can play an important role by opening its market and providing funding and technical assistance in crucial areas.

*The author is the director of the Center for European Policy Studies.