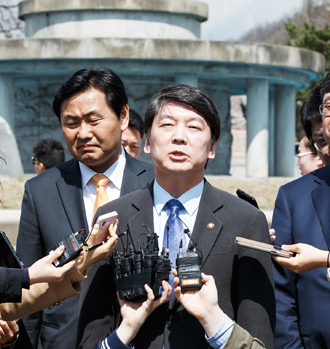 Representative Ahn Cheol-soo talks to the press in front of the Blue House in central Seoul on Friday. [NEWS1]

With the June 4 local elections now less than two months away, co-leaders of the opposition New Politics Alliance for Democracy continued yesterday to insist the ruling Saenuri Party maintain its election promise to not nominate candidates for city, district and county councils.

During a rally at Hongik University, Kim Han-gill and Ahn Cheol-soo urged the ruling party to honor its promise made in the 2012 presidential election campaign to give up its power to dole out nominations to candidates to the lower elected positions.

“Before determining whether nomination termination is a politically right or wrong decision, we should think about why people have lost their trust in politics,” said Ahn. “This whole issue is about keeping or breaking a promise by politicians.”

During the 2012 presidential election, both the Saenuri and the Democratic Party promised they would stop nominating candidates for city, district and county council. (The DP recently merged with Ahn’s supporters to create the New Politics Alliance for Democracy or NPAD.) The idea was to remove central party politics from the grass-roots level and put an end to certain forms of corruption, like lawmakers using their influence in Seoul to get nominations for people who bribed them.

The Saenuri Party, however, reneged on the promise in February, saying it was a responsibility of a political party to nominate a candidate for all races. It instead proposed an open primary system for the June elections in which people with no affiliation to the party can cast ballots to elect party candidates.

Despite the leaders of the newly merged party’s campaign on the issue, questions have arisen in and out of the NPAD on whether it is the strongest issue to pursue ahead of the local elections.

Jitters are rising in the opposition party over the fact that its public approval ratings are stuck far behind the ruling party’s, which has a margin of more than 15 percent over the NPAD.

The approval rating of the NPAD was 27 percent, a weekly survey of 1,205 adults nationwide conducted from last Monday through Thursday by Gallup Korea showed Saturday. The ruling party had an approval rating of 43 percent. Worsening the election prospects for the opposition, President Park’s approval rating went above the 60 percent mark for the first time since September last year, hitting 61 percent. The survey had a margin of error of plus or minus 2.8 percent.

Some opposition members are suggesting that the NPAD actually follow the Saenuri Party’s lead and back away from its own promise to give up nominations in the city, district and county council races. They think it will put many local election candidates - who are supporters of the opposition - at a disadvantage.

A rift within the party was obvious Thursday when journalist-turned-lawmaker Shin Kyoung-min remarked that, without doing the nominations, the party might lose miserably.

Ahn Cheol-soo demanded the president make her party keep the election promise during an address to the National Assembly. But all signs suggest the NPAD leadership will continue banging the drum over the ruling party’s broken promise.

On Friday, Ahn paid an unexpected visit to a visitor’s room at the Blue House and submitted a request for a talk with the president. He asked Park to reply to his request by no later than today.

The presidential office had not made an official response to Ahn’s demand as of press time yesterday.