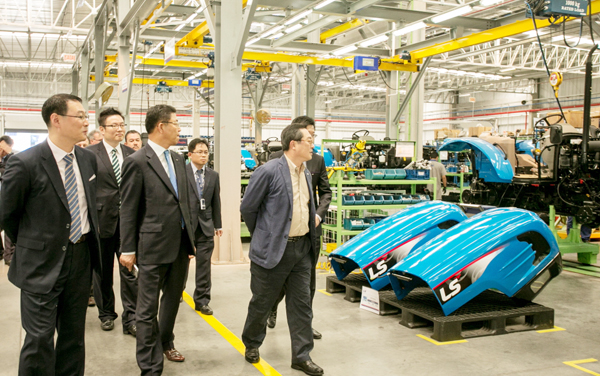 LS Group, Korea’s 16th-largest conglomerate, is trying to increase its competitiveness overseas as Chairman Koo Ja-yeol will travel to five countries in one month.

Despite a corruption scandal last year at its affiliate JS Cable, LS Group, which runs more than 100 branches in 25 countries, has been performing well. LS Corporation, its holding company, saw operating profit increase 1.2 percent year-on-year to 4.5 trillion won ($4.2 billion) in 2013 on a consolidated basis.

Analysts are expecting better results this year. According to a report from Korea Investment and Securities on Monday, LS Group is expected to see 473 billion won of operating profit coming from non-cable business affiliates in the first quarter, up 36 percent from the same period last year.

“LS Industrial Systems’ stabilized business operations and increased profits from copper refining and tractor sales from LS Mtron will lift its profitability,” said Choi Moon-sun, a researcher at Korea Investment and Securities. “Its cable business had a sluggish performance for the past three years, but it is expected to be normalized starting this year as overseas units cleans up their losses.”

Despite rosy speculation, Koo has been pushing hard to beef up the group’s global competitiveness, saying that its growth is limited locally.

As a result, Koo has been on the move. He traveled to Japan last month to discuss business with officials from Japan Korea Joint Smelting, a joint venture between LS-Nikko Copper, and also with Hitachi.

On Monday, Koo headed to Brazil where LS group subsidiary LS Mtron operates a tractor plant that opened last October and can produce 5,000 tractors per year,