With solid Q1, Samsung gets over the hump

With solid Q1, Samsung gets over the hump 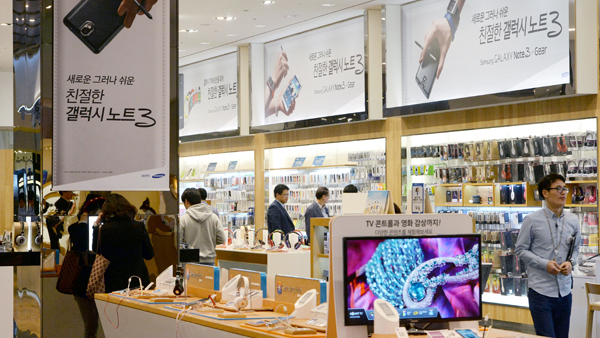 Customers look at Samsung Electronics products that are on display at the company’s promotional booth at its headquarters in Seocho, southern Seoul, yesterday.[NEWS1]

Samsung Electronics, which saw profits fall to the level of earnings shock in the fourth quarter last year, rebounded slightly in the first quarter of 2014.

The world’s No. 1 smartphone maker said yesterday it posted 53 trillion won ($50.6 billion) in sales and 8.4 trillion won in operating profit in the first quarter, up 1.08 percent from the last quarter of 2013.

It is often the off-season for IT companies from January through March.

To counter that, Samsung Electronics embarked on an austerity program early this year to reduce costs in the smartphone, home electronics and management divisions by 20 percent to 40 percent.

“In the last quarter, operating profit fell too short of the expectation and we had to be concerned about earnings in the first quarter,” said a spokesman for Samsung Electronics.

“We got over the barley hump along with the cost-reduction effects and improvement in the semiconductor and TV business creating a synergy.”

As operating profit slightly rebounded, industry observers say there are strong signs of recovery in the second quarter, when the Galaxy S5 will be sold.

The electronics giant can also expect healthy demand for TVs, such as ultra high-definition (UHD) TVs, in June when the Brazil World Cup will be held. 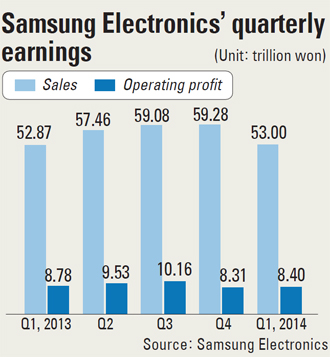 The preliminary result was estimated based on International Financial Reporting Standards (IFRS) and provided for the convenience of investors, as the first-quarter settlement is not yet completed.

“Since July 2009, Samsung has been providing quarterly estimate figures for the first time as a domestic conglomerate,” said a spokesman for Samsung.

“It began applying IFRS in 2010 to enhance shareholder value so that investors could more accurately forecast the company’s performance and value through the information provided by global standards.”

Despite yesterday’s earnings release, shares fell 0.21 percent to finish at 1.394 million won due to net selling by foreign investors.

Samsung Electronics accounts for 20 percent of the Kospi’s market capitalization.

New Galaxy S5 owners will be able to download 16 apps, including Workout Trainer and Lark, a health care app, and content worth 600,000 won for free.

In particular, for domestic customers, it is providing a free music streaming service for 30 days at Samsung Music.