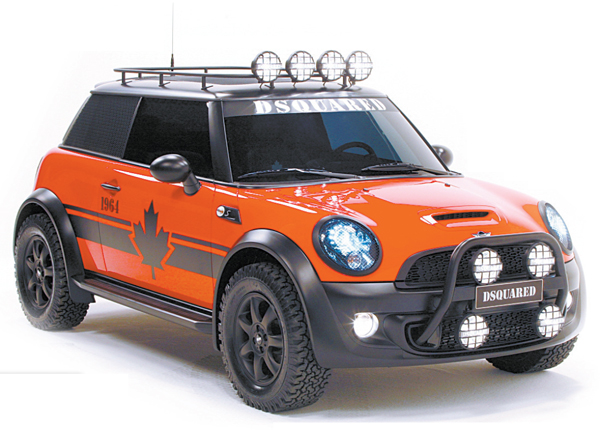 A tuned Mini Countryman, a collaboration by Mini and Dsquared2, a Canadian fashion brand. Provided by BMW

“I purchased a BMW Mini Cooper last year, and I’m looking for ways to make my car look more unique,” he said, while exploring the exhibition hall at Kintex in Ilsan, Gyeonggi, where Seoul Automotive Week 2014 was held from March 28 to 30.

Jung is just one of a growing numbers of Koreans who are becoming interested in customizing their cars. The street near Gangnam Severance Hospital in Yeoksam-dong, southern Seoul, is well known for having about 10 shops that offer customization services. According to employees of the shops, more people are calling in search of details on customizing and decorating their cars. 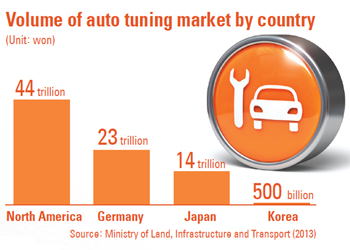 “We are getting a lot of phone calls inquiring about customizing, particularly imported cars,” said Seo Ji-hoon, a chief marketing officer at A-Seung Automotive Group. “It’s nearly four times as many calls as we received two to three years ago.

“We’re getting more inquiries not only from men in their 20s and 30s but also those in their 40s.”

The trend of more men customizing their cars, according to industry sources, is a change from the past when there were stereotypes that decorating cars is for women or that customizing car engines is for reckless drivers.

Compared to Korea, Japan has a bigger auto customization market. The sensational popularity of Hello Kitty auto accessories in Japan in the late 2000s was just the beginning. A Korean company called Etland also started selling Hello Kitty auto accessories in 2010 and brought about a Hello Kitty car boom in Korea. However, nearly 80 percent of the products were for female buyers, and Korean men took little interest in decorating their cars. And because customization at the time was considered detrimental to insurance coverage, Koreans were reluctant to upgrade their vehicles.

But car culture started to change in 2012. Customization has since become popular in Korea as the number of imported small-size automobiles - which are easy to personalize - increases.

“Roughly 50 percent of customized cars are either the BMW Mini or Volkswagen Tiguan rather than luxury sedans like the Mercedes-Benz S series,” said an auto industry official. “Consumers who look for unique cars with unique designs are more likely to customize their cars.”

The official noted that men who want to stand out are more likely to purchase auto accessories.

With the expanding auto accessory market, imported vehicles like BMW, Mercedes-Benz and Volkswagen have started to sell their own upgrades, with promising results.

“Sales of auto accessories last year were 9.5 times more than in 2007,” said an official from Volkswagen. “Most of the consumers were men in their 20s to 40s.”

As demand grows, customization shops are expanding. A-Seung Automotive Group launched its own detailing brand, TechArt Korea, that only deals with Porsches. The company is also an official importer of customization brand Brabus for Mercedes-Benz, and Abt for Volkswagen.

A representative from A-Seung said, “We are expanding our business while taking a close look at how domestic car customization culture develops.”

You Seng-choon from customization company SM Korea said, “Unlike in the past, we are getting a lot of inquires about customizing domestic cars like the Kia K3 or K5. Customization parts for the newly released Sonata are already ready for sale.”

Still, there are difficulties to overcome. Domestic car customization businesses still face legality issues because current laws only allow for certain auto parts to be customized.

The government recently announced that it will increase the number of auto parts approved for upgrading. “Regulations that are threatening industrial development should be revised as soon as possible so that advanced car customization culture and policies can gain traction in Korea,” said Kim Pil-soo, a professor of auto engineering at Daelim University, who is also a president of the Korea Automotive Tuning Organization.