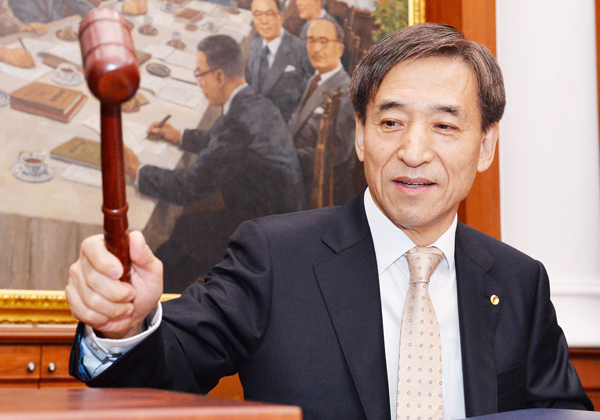 In his first monetary policy committee meeting as the governor of the Bank of Korea, Lee Ju-yeol froze the key rate at its current level of 2.5 percent.

The new governor said that at the moment he didn’t see any factor that would force the central bank to change its monetary policy as the Korean and global economies are on a trajectory of modest recovery.

But he also said that several risk factors linger, including financial instability in emerging markets.

The governor noted that although China’s economy is of concern, it is not at a stage to cause worries for Korea.

The financial market was focused on the monetary rate, but it was more interested in the BOK governor’s opinion after making his first monetary decision.

Most market analysts were satisfied that Lee, unlike his predecessor Kim Choong-soo, who was known for his long and vague remarks, was simple and clear in his answers.

“Compared to his predecessor it was clear that he was trying to make an effort in communicating [with the market],” said Kim Sang-hoon, an analyst at Hana Daetwoo Securities.

The new governor, who was nominated by the Blue House earlier this year, promised that he would be clear in his communication with the market.

He also went so far as to set guidelines for when he would make changes to the central bank’s monetary policy direction.

The new governor said a pre-emptive step would be considered when the output gap narrows and demand-led inflation pressure rises.

The comment indicated that the governor will likely raise the interest rate rather than lower it.

In fact, Lee added that it was not appropriate to adjust the monetary policy rate in order to tackle low inflation. Korean inflationary pressure remains low because the consumer price growth is still south of 1 percent. This is far below the BOK minimum inflation target of 2.5 percent.

Another hint that the governor might consider an interest rate hike lies in his statement that he does not currently consider the interest rate level to be burdensome.

“The current level of the interest rate isn’t high compared to the past,” Lee said. “I don’t think it is at a level that would bring significant changes to consumers’ spending or investments.”

Since he was nominated to the position by the Blue House, the market has considered Lee a hawkish governor who would prioritize inflation stability over growth.

His comment that he would take pre-emptive measures if inflationary pressure rises confirmed his hawkishness.

After his remarks the interest on treasury started to rise.

Kim Ji-mann, a market analyst at Eugene Securities, said he was sure that the new governor would not take a dovish stance on monetary policy and that under Lee, he does not expect a relaxed monetary policy.

“The [monetary policy committee] meeting strengthens our view that the next policy rate move by the Bank of Korea will be up,” said Ronald Man, an HSBC analyst. “Our baseline scenario is for a 25 basis point (0.25 percentage point) rate increase to be delivered as early as the third quarter of 2014.”

The monetary policy rate has remained at 2.5 percent for 11 consecutive months since the last change was made in May when then-Governor Kim lowered the seven-day repo rate from 2.75 percent.

The rate hold was already projected.

According to a survey by the Korea Financial Investment Association released on Tuesday, 99.2 percent of 200 bond experts bet that the central bank would freeze the monetary policy rate for this month.

The central bank also raised the nation’s economic outlook for this year from 3.8 percent projected in January to 4 percent.

However, BOK noted that the higher economic growth projection is not the result of changes in economic indicators but rather a change in its calculations. Therefore, it is basically the same as the bank’s previous projection.

The new GDP calculation added research and development costs to the output.

The BOK projected 3.9 percent growth in the first half and 4 percent in the second half.

The bank lowered its outlook on consumer price growth from 2.3 percent to 2.1 percent.