Foreigners get a lesson in Korean calligraphy

Foreigners get a lesson in Korean calligraphy 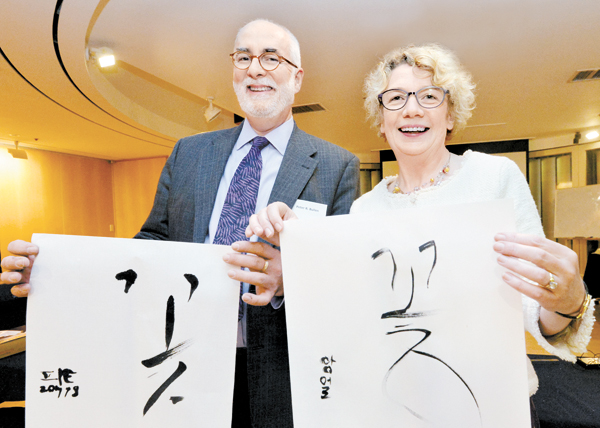 Aingeal O’Donoghue, right, the Irish ambassador to Korea, and her husband, Peter Bullen, pose with their calligraphy Tuesday at the French Cultural Institute in Jung District, central Seoul. [NEWSIS]

Aingeal O’Donoghue, the Irish ambassador to Korea, struggled to write down ggot, the Korean word meaning flower, during a calligraphy class held Tuesday at the French Cultural Institute in Jung District, central Seoul.

Her husband, Peter Bullen, was faring no better.

“How on earth am I supposed to hold this brush?” O’Donoghue asked with a frown. But minutes later, after the couple managed to finish their art pieces, they regained their composure and applauded each other’s work.

“Ah, I sense masculinity from your handwriting,” O’Donoghue said.

Bullen responded, “Yours is delicate.”

The couple was part of a group of 20 foreigners, including a few foreign ambassadors and diplomats, who participated in a Korean calligraphy class hosted by the Corea Image Communication Institute (CICI), a foundation registered under the Ministry of Foreign Affairs and Trade that holds forums teaching Korean culture to selected individuals.

Those who participated in the event included French Ambassador Jerome Pasquier.

“I’ve seen calligraphy for years, normally in museums, but I never really knew what it meant,” said Pasquier, who added that he worked in Hong Kong for four years before moving to Seoul last year. “The movement, the letters - they’re all utterly magnificent.”

Professional calligrapher Kang Byung-in, 52, led the day-long program, which the foundation stated was organized “to teach foreigners the traditional beauty of Korea.”

A renowned figure in his field, Kang has drawn the titles of some of the hottest dramas, including “Thrice-Married Woman” (2014) and “The Innocent Man” (2012).

Kang, the head of Kang Byung In Calligraphy Institute Sooltong, greeted the class with a presentation of the Korean alphabet’s structural sophistication, and then continued with a slideshow of his signature work.

He then distributed brushes, ink sticks and traditional paper, or hanji, to his guests and proceeded with a warm-up session.

As the participants became acclimated, they began to write seasonal words like “spring” and “flower.”

“The experience was quite intriguing,” said Jordanian Ambassador Omar Al Nahar. “For someone like me who has come from a different culture, calligraphy comes across as elegant and unique.”

Al Nahar added that calligraphy can act as a “communicational tool,” whereby people can share their respect and admiration for each other by offering the pieces as gifts.

Toward the end of the lesson, Kang picked up his brush and swiftly wrote down, “One sunny afternoon on a spring day, the wind blows to allow the flower to blossom.”

He added, “I hope everyone here broadly promotes Hangul [the Korean alphabet] and Korea’s fine culture.”